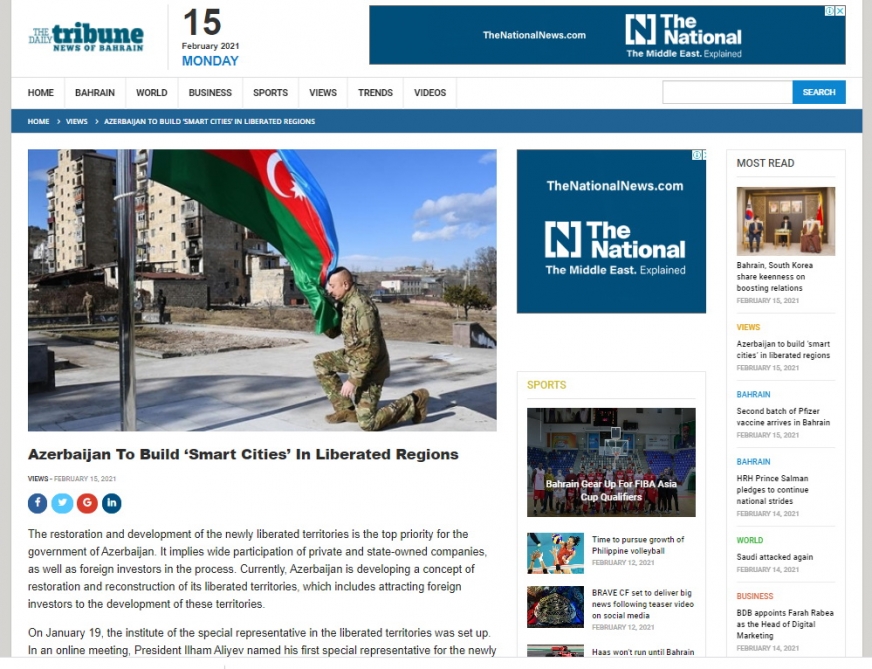 The Bahraini newspaper “News of Bahrain” has published an article by Azerbaijani Ambassador to the Kingdom of Saudi Arabia Shahin Abdullayev headlined “Azerbaijan to build smart cities in liberated regions”.

The article reads: “The restoration and development of the newly liberated territories is the top priority for the government of Azerbaijan. It implies wide participation of private and state-owned companies, as well as foreign investors in the process. Currently, Azerbaijan is developing a concept of restoration and reconstruction of its liberated territories, which includes attracting foreign investors to the development of these territories.

On January 19, the institute of the special representative in the liberated territories was set up. In an online meeting, President Ilham Aliyev named his first special representative for the newly liberated historical city of Shusha. “The first appointment is to Shusha District and this is absolutely natural. Shusha has a special place in the hearts of the Azerbaijani people. Shusha is the crown of Karabakh,” the President told his representative for Shusha, Aydin Karimov, who was earlier dispatched to the city to inspect and analyze the situation on the scene.

President Ilham Aliyev has reiterated the government’s determination to have rebuilt Shusha by preserving its historical appearance. “The city has been declared cultural capital of Azerbaijan and after restoration, Shusha will be a very lively city. Both local and international events should be held there – festivals, competitions, and tours. Shusha will be the cultural capital not only of Azerbaijan but also the region,” President Ilham Aliyev told Aydin Karimov.

It is worth to note that settlements recently liberated from Armenian occupation will be re-established based on the concepts of “smart city” and “smart village”. President Ilham Aliyev made the above-mentioned marks during his virtual talk with Rashad Nabiyev, whom he appointed as Minister of Transport, Communications and High Technologies.

The Azerbaijani leader said modern technology be used in the reconstruction work, which will start soon, and that urban infrastructure projects will run in parallel with the de-mining. President Ilham Aliyev said there are plenty of water resources and hence opportunities for solar and wind energy. “It is necessary to involve foreign investors and create opportunities for local companies. The recovered lands should be areas of high-tech development,” he said. He also called for the use of modern technology in agriculture, saying that “we can’t stay behind.”

In this regard, Azerbaijan has launched new infrastructure projects to reconstruct the territories liberated from Armenia’s 30-year-old occupation and companies of friendly countries will be involved in the restoration work. President Ilham Aliyev made the remarks while receiving the delegation led by Vice-President of the Italian Chamber of Deputies Ettore Rosato to on December 7.

“A restoration period is now setting in. Large-scale construction work will be carried out. Of course, first of all, Azerbaijani companies will take part in this work, and we will invite companies from countries that are friendly to us. Rather, we have already invited them,” President Ilham Aliyev said. The restoration of territories in and around Karabakh was also a major topic of the meeting between the Minister of Economy of the Republic of Azerbaijan Mikayil Jabbarov and US Ambassador to Azerbaijan Lee Litzenberger on January 27.

During the meeting, the possible involvement of US companies in the restoration of reclaimed territories in Nagorno-Karabakh and around it was discussed. In turn, the US ambassador expressed his satisfaction with the restoration of Azerbaijan’s territorial integrity, noting the importance of ensuring sustainable peace in the region. Litzenberger expressed the willingness of US companies to participate in projects for the restoration of the liberated territories, and above all, in projects for water resources management, construction of roads, other infrastructure, and digital technologies.”