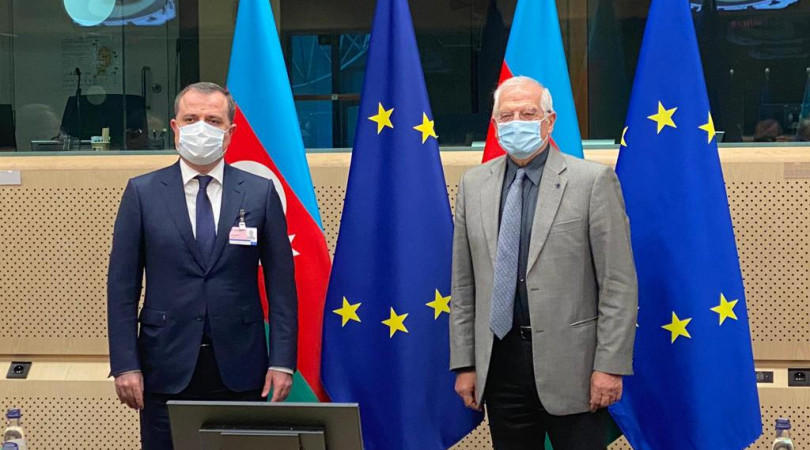 Azerbaijan has strongly condemned draft resolutions on Nagorno-Karabakh adopted by the Belgian and Dutch parliaments containing baseless and biased allegations against Azerbaijan and Turkey, the Foreign Ministry reported.

During the plenary session of the House of Representatives of the Belgian Federal Parliament on December 17, a draft resolution titled “Support to the initiatives of Belgium and international organizations for a lasting solution to the Nagorno-Karabakh conflict and a ceasefire” was adopted.

The ministry described as “unacceptable” that the document reflects biased opinions despite the fact that it includes references to the norms and principles of international law, as well as the Resolutions No 822, 853, 874 and 884 of 1993 of the UN Security Council, after the explanation provided by the Belgian Government.

Foreign Minister Jeyhun Bayramov, who is on a working visit to Belgium to attend a meeting of the Azerbaijan-EU Cooperation Council, also protested the resolution. During the meeting with Sophie Wilmes, Deputy Prime Minister and Minister for Foreign Affairs, European Affairs, Foreign Trade and Federal Cultural Institutions, Bayramov said that the resolution by the Belgian Parliament reflected baseless and biased allegations against Azerbaijan, as well as brotherly Turkey.

He stressed that despite the inclusion of the references to the norms and principles of the international law and relevant resolutions of the UN Security Council to this decision as a result of the Belgian government’s explanation, the document contains a number of issues not reflecting the reality causes a serious concern to the Azerbaijani public. In turn, Sophie Wilmes expressed the interest in developing cooperation between the two countries. She stated that Belgium has always acted in accordance with international law in the development of bilateral relations. Drawing attention to the process of establishing long lasting peace and sustainable development in the post-conflict period, Sophie Wilmes said that Belgium will be pleased to participate in this process.

In a separate report on December 20, the ministry condemned anti-Azerbaijani resolutions adopted by the Dutch parliament.

“Recently, we observe that the Parliament of the Kingdom of the Netherlands has adopted resolutions against Azerbaijan that do not reflect the truth and are completely biased. Thus, the 11 resolutions adopted by the House of Representatives of the Dutch Parliament since October 7 on the situation in the region were one-sided, reflecting baseless and biased claims, and openly expressed anti-Azerbaijani and anti-Turkic position. The resolution ‘On the provision of humanitarian assistance to Nagorno-Karabakh’ adopted on December 17 again distorts the truth, reflects unfounded allegations against Azerbaijan and Turkey,” the ministry said.

The ministry added that Azerbaijan reject all the allegations and urged the Dutch parliament to stop displaying one-sided position.

“We strongly reject these resolutions of the Dutch Parliament and call on the House of Representatives to renounce its unilateral position and act in accordance with the norms and principles of international law.

The Netherlands, as well as the other European countries whose parliaments adopted biased resolutions, instead of fomenting hostility can contribute to the development of the countries of the region in peace, stability and prosperity by supporting the new security and cooperation framework in the region created by the joint statement signed on November 10, 2020,” the ministry said in its statement.

As part of his working visit to Belgium, Azerbaijani Foreign Minister Jeyhun Bayramov met EU High Representative for Foreign Affairs and Security Policy Joseph Borrell, EU Commissioner for Neighborhood Policy and Enlargement Oliver Varhely and Deputy Prime Minister and Minister of Foreign Affairs, European Affairs and Foreign Trade and the Federal Cultural Institutions Sophie Wilmes. All meetings focused on the latest situation in Nagorno-Karabakh and further cooperation with the EU.

Bayramov, who took part in the 17th Cooperation Council meeting between Azerbaijan and the European Union in Brussels on 18 December informed EU delegation led by EU High Representative for Foreign Affairs and Security Policy Joseph Borrell on the latest situation in the Nagorno-Karabakh region.

“Another provocation by Armenia on September 27 this year, Azerbaijan’s counter-offensive operations, the 44-day Patriotic War, as well as war crimes committed by Armenia during this period, purposeful targeting the Azerbaijani civilian population, the numerous facts that Azerbaijan possesses on transfer of foreign mercenaries by Armenia to the region and etc. were brought to the attention of the other side,” the Azerbaijani Foreign Ministry said in a report on December 19.

The EU delegation was briefed on the trilateral statement signed on November 10 and its implementation, the new framework for security and cooperation in the region created by the agreement.

High Representative Joseph Borrell stressed the importance of providing humanitarian assistance to people in need in the region and the EU’s readiness to provide assistance in this regard. The possibility of the EU’s role in the post-conflict recovery and reconciliation phase was stressed.

At the meeting, the sides also exchanged views on cooperation between the EU and Azerbaijan since the last meeting of the Cooperation Council and took stock of major achievements in this regard. It was noted that despite the pandemic this year, trade relations were developing and the EU remained Azerbaijan’s main trading partner. The sides discussed the strategic partnership in the field of energy, the implementation of the Southern Gas Corridor, as well as transport and connectivity projects, Azerbaijan’s great potential in this area, investment and other topics.

The sides noted the importance of concluding a new comprehensive agreement, which will form the legal basis of relations between Azerbaijan and the EU, based on mutual respect and equal partnership.

During the meeting, the sides also exchanged views on regional and international issues of mutual interest, the ministry said.

In a report on December 18, the ministry focused on details of a meeting between EU Commissioner for Neighborhood Policy and Enlargement Oliver Varhely and Jeyhun Bayramov as part of the latter’s working visit to Belgium.

“During the meeting, the sides exchanged views on such issues as a partnership between Azerbaijan and the European Union, including trade, energy, transport and connectivity, investment, as well as the development of a new agreement that will form the legal basis of relations,” the ministry said.

Speaking about the current situation in the region, Minister Jeyhun Bayramov conveyed detailed information about the 44-day Patriotic War, the implementation of UN Security Council resolutions, as well as the war crimes committed by Armenia, and the targeting of civilians during this period. Informing the other side about the joint statement dated November 10 and its implementation, the minister spoke about the new security framework and prospects for cooperation in the region with the cessation of hostilities, the report added.

Commissioner Oliver Varhely mentioned the EU’s intention to help people affected by military operations in the region. The importance of providing humanitarian assistance and, in this respect, providing this assistance, in coordination with the Azerbaijani side, to all people in need was emphasized. The sides also discussed regional and international issues of mutual interest, the ministry reported.

At a meeting with Belgian counterpart Sophie Wilmes, Minister Bayramov and Wilmes exchanged views on bilateral Azerbaijani-Belgian cooperation, as well as partnership with the European Union.

“One of the focused issues of the meeting was energy cooperation, the launch of the Southern Gas Corridor and the representation of a Belgian company at the Southern Gas Corridor consortium. The sides also discussed the latest situation in the region. Minister Jeyhun Bayramov informed the other side about the provocation launched by Armenia on September 27 this year, Azerbaijan’s counter-offensive operations and the 44-day Patriotic War. The Belgian Minister was informed about the war crimes committed by Armenia during this period, purposeful targeting the Azerbaijani civilian population, as well as the issues that Azerbaijan has numerous facts on transfer of foreign fighters and mercenaries by Armenian government to the region and bringing this information to the attention of the relevant international organizations,” the ministry said.

Jeyhun Bayramov informed Wilmes about the trilateral statement dated November 10, 2020 and its implementation. At the same time, noting the post-conflict recovery and reconstruction phase, Minister Jeyhun Bayramov said that a new framework for security and cooperation has been established, which opens new opportunities for the development and prosperity of the region. During the meeting, the sides exchanged views on other issues of mutual interest, the report added.