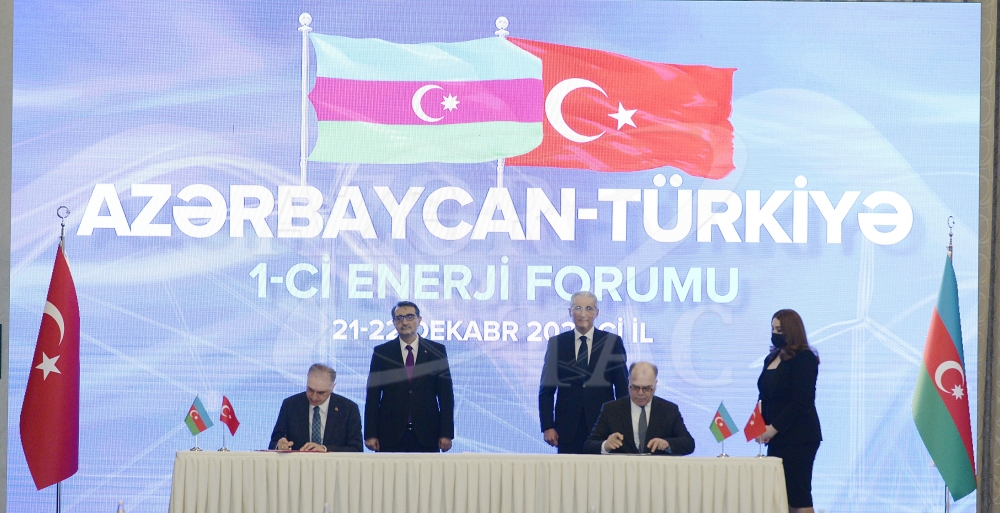 The 1st Azerbaijan-Turkey Energy Forum has been held in Baku.

The Forum was co-chaired by Azerbaijani Energy Minister Parviz Shahbazov and Turkish Minister of Energy and Natural Resources Fatih Donmez. The two-day forum was organized within the framework of the Joint Intergovernmental Commission on Economic Cooperation between Azerbaijan and Turkey to further strengthen strategic energy cooperation.

The forum was preceded by a bilateral meeting between the co-chairs. The meeting focused on the strengthening relations between the two countries and the prospects for developing cooperation in the energy sector.

In his opening speech at the forum, Energy Minister Parviz Shahbazov praised the 1st Azerbaijan-Turkey Energy Forum as a platform to support the rise of Azerbaijan-Turkey relations to the level of alliance also in the field of energy. It was noted that the Azerbaijani-Turkish union, which ensures security, development and progress, is a leading factor in new geopolitical realities and development processes in the region under the leadership of President Ilham Aliyev and President Recep Tayyip Erdogan.

In total, more than 85 billion cubic meters of natural gas from the Shah Deniz field have been supplied to the Turkish gas market since 2007.”

During the speech, the investment activity of Azerbaijan in Turkey was highlighted on the example of projects such as STAR Oil Refinery and Petkim.

“Azerbaijan’s investment in Turkey is more than $19 billion. As President Ilham Aliyev said, this scope of funding and investment can be made only in the brother country.”

In his speech, Turkish Minister of Energy and Natural Resources Fatih Donmez said that the eternal fraternal relations between Azerbaijan and Turkey are developing due to the fact that the two countries` peoples have the same ancestry and mutual ties. Having noted the victory of Azerbaijan in the Patriotic War, the minister said: “As part of the ‘Green Energy Concept’ planned to be implemented in the liberated territories, we will continue to stand by Azerbaijan with both our public and private sectors. In this way, we will continue to work in coordination with Azerbaijan, both to establish lasting peace in the region and to rebuild the liberated areas. I believe that the transfer of many successful experiences of our joint cooperation in the hydrocarbon industry to the renewable energy sector will give a new stimulus to our relations.”

Other speakers at the event included Deputy Minister of Economy Rovshan Najaf, President of SOCAR Rovnag Abdullayev, President of “AzerEnergy” OJSC Baba Rzayev, Director of the Azerbaijan Renewable Energy Agency under the Ministry of Energy Tabriz Ammayev, TPAO Director General Melih Han Bilgin, Director General of the Turkish Electricity Transmission Company Orhan Kaldirim and Chairman of the Energy Council of the Turkish Foreign Economic Relations Council (DEIK) Haluk Kalyoncu. Information was provided on the activities done to develop cooperation in relevant fields, the planned measures and the results of the first meetings of the working groups held before the Forum.

After the signing ceremony, a briefing was held for media representatives.

The 1st Energy Forum aims to expand existing energy cooperation between Azerbaijan and Turkey, assess new opportunities for cooperation and implement them through specific projects.

Previous Azerbaijan, Iran mull political, economic, energy co-op
Next ‘The issue has been raised before “Google” Company regarding the fact that in “Google maps” application, along with official names of Karabakh region of Azerbaijan in Azerbaijani language, fake names in Armenian language are also indicated’