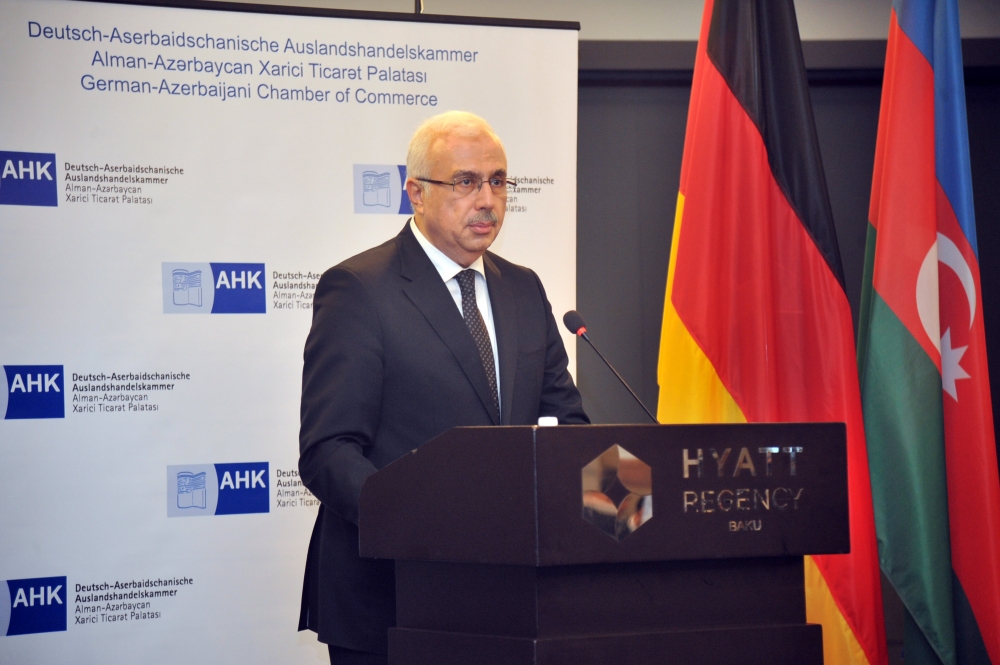 Baku has today hosted the German-Azerbaijani business forum on modernization of industry and infrastructure.

The Forum was organized by the German-Azerbaijani Chamber of Commerce (AHK Azerbaijan) in cooperation with the German Eastern Business Association.

This year the core themes of the Forum were finance and business climate, transport and infrastructure, and agriculture and nutrition. The aim of the event was to provide German and Azerbaijani companies with a business platform where they can present their projects and discuss current opportunities for cooperation.

The Forum was inaugurated by Tobias Baumann, Executive Director of the AHK Azerbaijan, who delivered a welcoming speech and shortly introduced the agenda of the event. Following this, Niyazi Safarov, Deputy Minister of Economy of the Republic of Azerbaijan, Dr Wolfgang Manig, German Ambassador to Azerbaijan and Farid Isayev, Vice President of AHK Azerbaijan, welcomed the participants of the event with their opening remarks.

Deputy Minister of Economy Niyazi Safarov informed the participants about the systematic measures to modernize the industry, diversify the non-oil sector, and to foster business and investment climate in Azerbaijan. Safarov also stated that sustainable economic development, competitiveness in the market, strengthening export potential, employment and entrepreneurship development are the core targets of the current governmental policies. Underlining the development of bilateral political and economic relations between Germany and Azerbaijan, Safarov referred to the trade relations as one of the main roadways of economic cooperation and stated that the trade turnover between the two countries in the first seven months of 2019 constituted more than $ 1 billion. Emphasizing the interest of Germany in the implementation of twining projects in Azerbaijan, the deputy minister noted that German representatives actively participate in the twining tenders carried out by the government mainly in the areas of energy, agriculture, statistics, standardization, and human rights.

Speaking about the AHK Azerbaijan as a very important pillar in the foreign economic policy of Germany, Dr Wolfgang Manig emphasized the Chamber`s role in bringing together the high level stakeholders and in organizing the delegation trips for German companies to Azerbaijan to raise their awareness about the Azerbaijani market and to pave a way for new partnerships. Moreover, he underlined the significance of Azerbaijan`s further convergence with the European structures and expressed the readiness of Germany to accompany Azerbaijan`s drift towards a modern, globalized economy, enshrined into a rules-based international economic system.

In addition, Farid Isayev highlighted the crucial role of the events and forums organized by AHK Azerbaijan in promoting the public-private dialogue in the country and in contributing to bilateral relations and economic cooperation between Germany and Azerbaijan.

The opening ceremony was followed by a plenary session on finance and business climate.

Ibrahim Alishov, Acting Chairman of the Executive Market Supervisory Authority of the Republic of Azerbaijan (FIMSA) delivered the keynote speech on the measures taken by FIMSA to improve the business environment and the Chamber`s near-term plans for financial sector reforms. He was joined on stage by Anar Hasanov, Chairman of the Board and CEO at AccessBank CJSC, Helmut Mader, Senior Relationship Manager for Russia and CIS at Bayerische Landesbank, Ivana Duarte, Head of the Azerbaijani Office of European Bank for Reconstruction and Development (EBRD) and Ilgar Mehti, Director at Ekvita LLC, who contributed to the plenary discussion by sharing their valuable insights on the recent developments in the banking and financial sectors of the country.

In addition to the impulse dedicated to the finance and business climate of Azerbaijan, this year the programme of the event entailed parallel discussions focusing on development of transport and infrastructure, and agriculture and nutrition as driving forces for economic reforms in Azerbaijan.

The business event was attended by about 300 representatives from relevant government institutions, local and German businesses, and was concluded with networking lunch.