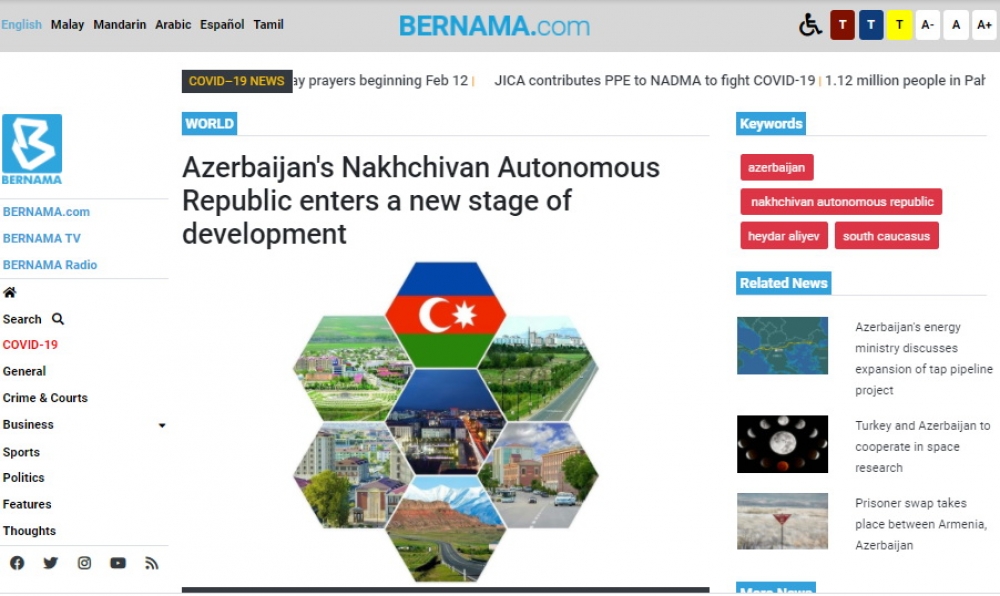 The Malaysian National News Agency BERNAMA has published an article by the Embassy of Azerbaijan in the country dedicated to the 97th anniversary of the establishment of Nakhchivan Autonomous Republic, an integral part of Azerbaijan.

Headlined “Azerbaijan’s Nakhchivan Autonomous Republic enters a new stage of development,” the article says: “The ancient land of Azerbaijan’s Nakhchivan Autonomous Republic (NAR) today has entered a new stage of development, with its strategic significance increases in terms of opening communication corridors and transportation routes in the region in the aftermath of the recent Second Karabakh War.

The establishment of a corridor linking Azerbaijan to its Nakhchivan exclave, as stipulated in the recent trilateral agreement signed by Azerbaijan, the Russian Federation, and Armenia on November 10, 2020, has the potential to propel the region’s states.

By agreement of the parties, the construction of new transport communications connecting the Nakhchivan Autonomous Republic and Azerbaijan’s western regions will be provided.

From the perspective of Eurasian connectivity, the Nakhchivan corridor could become part of both north-south and east-west transport corridors that get through the South Caucasus. A corridor from the Nakhchivan Autonomous Republic to the mainland of Azerbaijan will contribute to the development of the entire region.

The landlocked Nakhchivan Autonomous Republic, which has a population of some 450,000 people, shares borders with Armenia, Turkey and Iran. Its capital, Nakhchivan City, is located near the border with Iran and is about 536 km from Baku, the capital of Azerbaijan.

On February 9, Azerbaijanis from around the world celebrated the 97th anniversary of the establishment of the Nakhchivan Autonomous Republic, the birthplace of Azerbaijan’s national leader Heydar Aliyev who made many historical moments from NAR.

The path to Azerbaijan’s independence began in Nakhchivan in the early 1990s. The NAR is indebted to Heydar Aliyev, the national leader of the Azerbaijani people, during those hard times. It’s worth mentioning that on the initiative of him, (among others) the national state symbols of Azerbaijan were the first time accepted in Nakhchivan, the “Soviet Socialist” phrase was extracted from the name of the Autonomous Republic, the work of local agencies of the communist party was ceased, the referendum for the continuation of USSR was refused.

Furthermore, Soviet troops were taken out from the region and Azerbaijan’s 3-colour flag was raised in border points,” the article said in recalling the history during the tumultuous period in Azerbaijan and NAR.”

According to the article, the autonomous status of the region has been determined with the Treaties of Moscow (March 16, 1921) and Kars (October 13, 1921) where the treaties made possible the integration and unification of Nakhchivan and also guaranteed the autonomy of Nakhchivan province under the patronage of the Government of Azerbaijan. Officially, on February 9, 1924, Nakhchivan was turned to the Autonomous Republic.

The article explains that over the years due to the conflict between Armenia and Azerbaijan, the NAR went through many difficulties in its development, such as being isolated, and had to subsist under blockade conditions.

“Due to this situation, Nakhchivan’s blockaded residents developed an unwavering sense of self-sufficiency born from necessity. Unwilling to remain economically reliant on neighbours, Nakhchivan people began planting their own food and producing their own goods. Today, the NAR economically has become one of the most developed regions of Azerbaijan. Over the recent years, significant steps have been taken in the development of Nakhchivan, strengthening its status of autonomy and improving the welfare of its population,” the article further pointed out.

“The Nakhchivan is also known as a unique destination of ancient civilisations and has rich architectural heritage as well as historical-cultural monuments.

Historically recognised as one of the most important cities of the Near East and the Middle East, Nakhchivan is well-known for its unique role in preserving centuries-long accomplishments of Islamic culture,” the article mentions.

“With its ancient history, rich culture and centuries-old national heritage, Nakhchivan is one of the cradles of human civilization and a popular trade, art, science and cultural centre of the East; and the written sources, the archaeological materials discovered in the area of Nakhchivan, the famous Gamigaya petrography and other monuments in the territory once again prove that the age of Nakhchivan is around 5,000 years.

Nakhchivan was proclaimed as the Islamic Culture Capital for 2018 during the 6th conference of Culture Ministers of the Organisation of Islamic Cooperation (OIC) in October 2009 in Baku,” the article notes.

The article also highlights the tourism potential of Nakhchivan, offering cultural heritage, historical, botanical, bird watching, ecological, health tourism and other experiences to local and international travelers throughout the year.

“Nakhchivan is a unique destination for health tourism as well. Being one of the symbols of Nakhchivan and having natural reserves of salt, Duzdag (Salt Mountain) is unique in the world, specialising in the treatment of allergic and non-allergic bronchopulmonary diseases based on salt therapies.” 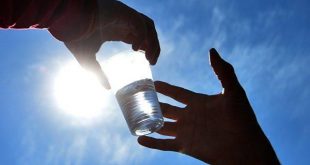