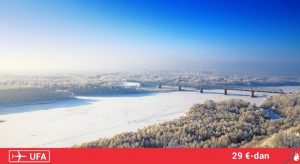 Starting from May 12, the Airline will launch direct flights from Baku to Ufa. Flights will be operated twice a week on Thursdays and Sundays.

The capital of Bashkortostan will be the sixth destination of Buta Airways in Russia. Currently, the route network of the low-cost airline includes five cities in Russia – Moscow, St. Petersburg, Kazan, Astrakhan and Mineralnye Vody.

The minimum fare for Baku-Ufa flight like for other destinations of the Airline, will cost 29 euros (one way).