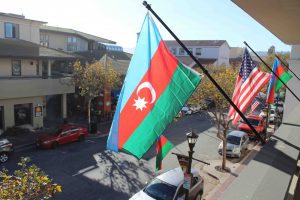 National Flag Day of Azerbaijan has been marked in the U.S. City of Monterey, California. In honor of this day, a central street (Alvarado Street) of Monterey was decorated with the Azerbaijan flags. Moreover, November 9, 2018 was proclaimed as “Azerbaijan National Flag Day” in the city. The relevant proclamation was signed by the Mayor of Monterey Clyde Roberson.

The proclamation, which was sent to the Consulate General of Azerbaijan in Los Angeles, says: “On May 28, 1918, Azerbaijan declared its independence, establishing Azerbaijan Democratic Republic, which became the first secular parliamentary democracy in the Muslim world, and was recognized by other democratic nations, including the U.S.A.”

The document states that “during its short period of independence, Azerbaijan granted women the right to vote, becoming the first majority-Muslim nation to do so.”

It also stresses that Azerbaijan adopted its tri-color flag as the State Flag of Azerbaijan Democratic Republic on November 9, 1918, and after restoring its independence from the Soviet Union in 1991 this flag was announced as the National Flag of the Republic of Azerbaijan.

The proclamation further notes: “The Republic of Azerbaijan remains a staunch ally and strategic partner of the U.S.A., being internationally regarded as a successful model for peaceful and harmonious coexistence of Muslims, Christians and Jews.”

The document also mentions that the City of Monterey and the city of Lankaran in Azerbaijan established a Sister City Partnership in 2011.

In conclusion, the Mayor of Monterey Clyde Roberson, on behalf of the City Council and citizens, honoring the 100th anniversary of the National Flag of Azerbaijan proclaims November 9, 2018, to be the “Azerbaijan National Flag Day” in the City of Monterey and encourages all city residents to join in this celebration.