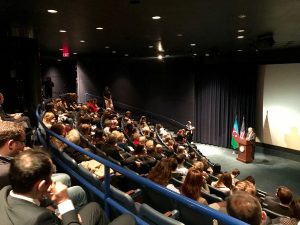 Washington hosted a reception related to the 100th anniversary of the Azerbaijani parliament, and the presentation of the documentary film “Lifelong Mission” was held on this occasion, Trend reports citing the Azerbaijani Embassy in the US.

The reception was held by the Azerbaijani Embassy in the US as part of the activities in connection with the 100th anniversary of the Azerbaijan Democratic Republic (ADR).

Speaking at the event, Azerbaijani Ambassador to the US Elin Suleymanov reminded that the ADR was the first democratic republic in the Muslim East, and also reminded about its success in many areas, including diplomatic ones.

In this regard, the ambassador spoke about the activities of a delegation headed by chairman of the ADR parliament, Alimardan Bay Topchubashov, at the Paris Peace Conference and stressed that despite the difficult conditions, the delegation was able to achieve recognition of the de facto independence of Azerbaijan by the council of allied countries.

Suleymanov reminded that on May 29, 1919, the delegation met with US President Woodrow Wilson, who had a high opinion of the delegation.

The ambassador noted that the national leader of the Azerbaijani people Heydar Aliyev and President Ilham Aliyev worthily continue the ideals of the independent Azerbaijani statehood.

Suleymanov also said that the recognition of Azerbaijan, which restored its independence in 1991, by the US and the establishment of diplomatic relations with the country took place during the leadership of the recently deceased 41st President of the US George Herbert Bush.

The ambassador expressed particular gratitude to the film’s main producer Arzu Aliyeva, to the Baku Media Center, which prepared the film, to the Heydar Aliyev Foundation and to its head Mehriban Aliyeva for their support.

Then, Azerbaijani MP, chairman of the parliamentary committee for international relations and inter-parliamentary ties and head of the Azerbaijan-US Friendship Group, Samad Seyidov delivered his speech.

Seyidov said Azerbaijan is following the path of independent development, and touched upon the importance of relations between Azerbaijan and the US.

The MP noted the significance of the existing strategic cooperation between the two countries. Seyidov proudly noted that the US celebrates the 100th anniversary of the Azerbaijani parliament.

Then, the guests watched the film “Lifelong Mission”.