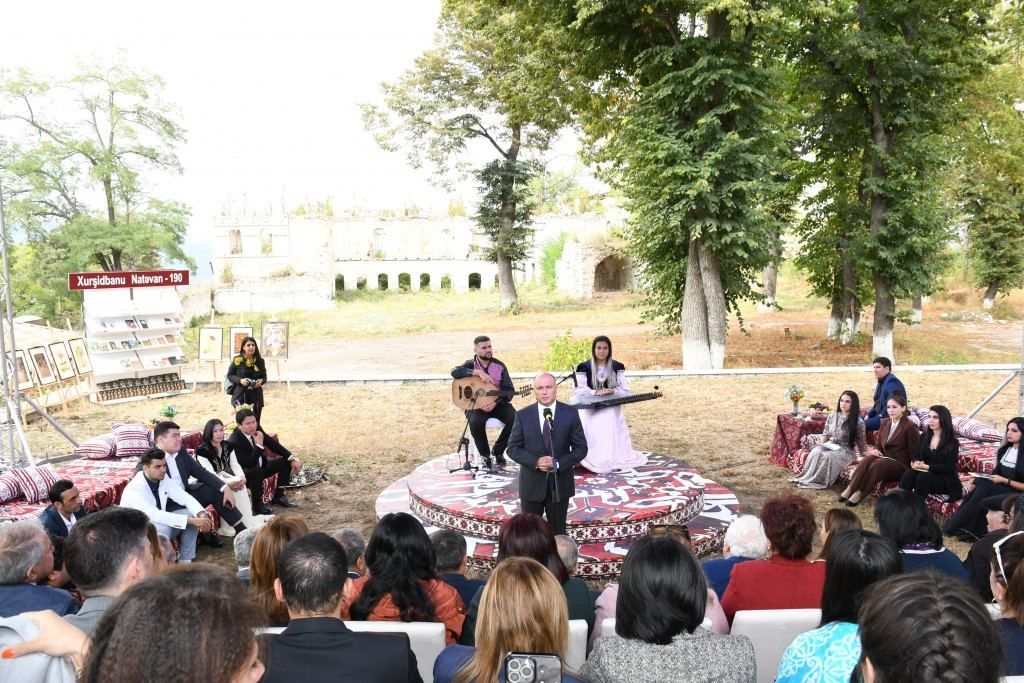 Majlis-Uns is a literary circle that operated in the second half of the 19th century in the city of Shusha under the leadership of the poetess, daughter of the last Karabakh khan Khurshidbanu Natavan.

Initiated by poet Rahim bay Fen, the literary event was first held in 1864 in the house of poet Haji Abbas Agah.

In 1872, the event was headed by Khurshidbanu Natavan and gained wide popularity.

The literary circle attracted many poets and musicians from Karabakh and other parts of Azerbaijan.

The literary circle operated until the death of the poetess in 1897.

Calligraphic manuscripts of many poets, who took part in the event, are stored in the Baku Institute of Manuscripts.

This year Shusha has witnessed the revival of Majlis-Uns. The event was timed to the 190th anniversary of the poetess Khurshidbanu Natavan.

The participants in the event first got acquainted with the exhibition dedicated to the great poetess.

Flowers were laid at the busts of Khurshidbanu Natavan, Bulbul, and Uzeyir Hajibayli.

In his speech, Anar Karimov stressed that in accordance with the instructions of the country’s leadership, large-scale construction work is being carried out in all areas in the territories liberated from the Armenian occupation.

He pointed out that the ministry focuses on projects to restore the cultural infrastructure and return culture to the historical Azerbaijani lands.

The minister drew attention to the fact that after the liberation of Azerbaijani territories, it was decided to establish the Majlis-Uns Public Union to preserve and promote this tradition of Karabakh literary assemblies.

The Union focuses on research and promotion of Karabakh’s literary and cultural heritage.

Anar Karimov expressed his confidence that the union will contribute to the work of reviving Azerbaijani culture in the liberated lands and the upbringing of literary generations.

The rich art program was presented as part of the literary event. During the poetry hour, writers from Azerbaijan and other Turkic-speaking countries recited poems dedicated to Khurshidbanu Natavan. Majlis-Uns will remain in people’s memories for a long time.