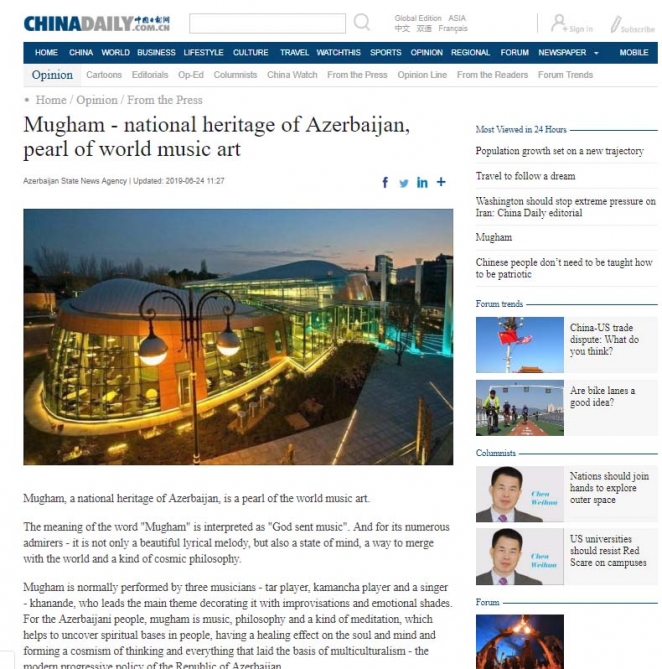 China Daily newspaper has published an article headlined “Mugham, a national heritage of Azerbaijan, is a pearl of the world music art”.

The article reads: “The meaning of the word “Mugham” is interpreted as “God sent music”. And for its numerous admirers – it is not only a beautiful lyrical melody, but also a state of mind, a way to merge with the world and a kind of cosmic philosophy.

Mugham as a genre took shape in Azerbaijan in the period of the “Muslim Renaissance”, which is attributed to the 12th-13th centuries when many great poets created. Their ghazals, like the poetry of later writers, formed the basis of Mugham. In those distant years, the formation of various schools of Mugham singers began in Baku, Shamakhi, Ganja, Nakhchivan, and, of course, in Karabakh. It was Shusha – “Conservatoire of the East” – that gave the world the most outstanding singers. Their hallmark was the famous Mugham “Karabakh shikestesi”.

“In 1908, the founder of the Azerbaijani composer school, Uzeyir Hajibayli, wrote the Mugham opera “Leyli and Majnun”. And in 1921, the Azerbaijan State Conservatory, in which the teaching of Mugham was included in the curriculum, was founded in Baku.

In the 1970s, UNESCO was actively involved in the popularization of Mugham. Under its auspices, the first international symposiums and festivals of traditional music were held in Moscow in 1971, in Alma- Ata in 1973 and in Samarkand in 1978 and 1983. Mugham became widely known not only in Europe but also in the USA, Canada, Japan and other countries.

Four years later, a multi-volume encyclopedia of Mugham was published in Baku, and the head of its editorial board and editor-in-chief was Azerbaijan’s first lady Mehriban Aliyeva,” the article says.

“On 27 December 2008, Azerbaijani President Ilham Aliyev and former Director-General of UNESCO Koichiro Matsuura opened the International Mugham Center. In March 2009, it hosted the First International World of Mugham Festival, which was organized on the initiative of the Heydar Aliyev Foundation. The main goal of these festival is to popularize Azerbaijani mugham in the modern world. Since then, these festivals of Mugham have been held every two years, and each new festival gathers more and more artists and admirers of this ancient and eternally young art.”

“Mugham, which roots deep in the history, is rightly regarded as pearl of Azerbaijani music art and frequently applied music among singers and musical bands all over the world, as well as mainstream audience,” the article concludes.