Czech technology may be applied to Azerbaijan’s renewable energy sector 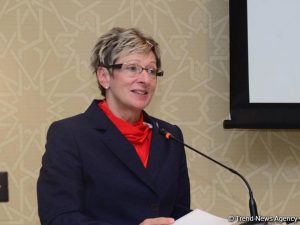 The opportunity for Czech companies can represent the fields that are in priority to be developed by Azerbaijan’s government, to diversify the economy and support the development of the non-oil sector, Marta Novakova, Minister of Industry and Trade of the Czech Republic told Trend.

She stressed that great opportunities represent new projects focused on the modernization of the transport infrastructure, such as reconstruction of the road and railway network.

The minister went on to say that Czech companies can also succeed as suppliers in the field of pharmaceuticals, electrical engineering, consumer electronics and environmental technologies in Azerbaijan.

Novakova also underlined that there is a great potential for future cooperation in the field of renewable energy sources, further adding that technology of Czech companies may be applied in the renewable energy field, and improve the efficiency of Azerbaijan’s energy industry.

The Czech minister further pointed out that in Azerbaijan, emphasis is also put on the construction of sewage treatment plants, water treatment plants and cleaning of contaminated soil.

“As for joint-ventures, I know that both sides are ready to support steps leading to a stronger and more stable partnership between Czech and Azerbaijani companies in the aforementioned areas. We have agreed that joint ventures are one of the exciting alternatives of our partnership at the business level. We want to highlight this element in our discussions with the domestic business sphere,” she stated.

Novakova emphasized that untapped potential exist in many sectors and the key is to maintain the collaboration in energy sector and move more rigorously into other sectors in order to diversify business.

According to the State Customs Committee of Azerbaijan, trade turnover with the Czech Republic in January-December 2018 amounted to $1.04 billion.

As compared to the indicator for the same period of the last year, the trade turnover between the countries increased by 36,5 percent, while the exports of Azerbaijani products increased almost two times.