Edgars Rinkēvičs: Azerbaijan is an important partner for Latvia 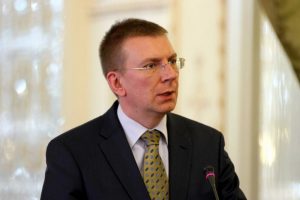 In his letter, Minister Elmar Mammadyarov congratulated his counterpart Edgars Rinkēvičs on the occasion of the 25th anniversary of the establishment of diplomatic relations between the Republic of Azerbaijan and the Republic of Latvia and wished the friendly people of Latvia peace, stability and prosperity. Elmar Mammadyarov noted that the relations between Azerbaijan and Latvia have a deep historical roots and that after the restoration of the independence of the two countries, bilateral relations in political, economic, cultural and other spheres have been successfully developing.

Latvian Foreign Minister Edgars Rinkēvičs emphasized that Azerbaijan is an important partner for Latvia. He noted that it was very pleasant to see concrete results in political, economic, cultural and educational spheres over the past 25 years, and expressed his confidence that cooperation between the two countries would further strengthen in the coming years.