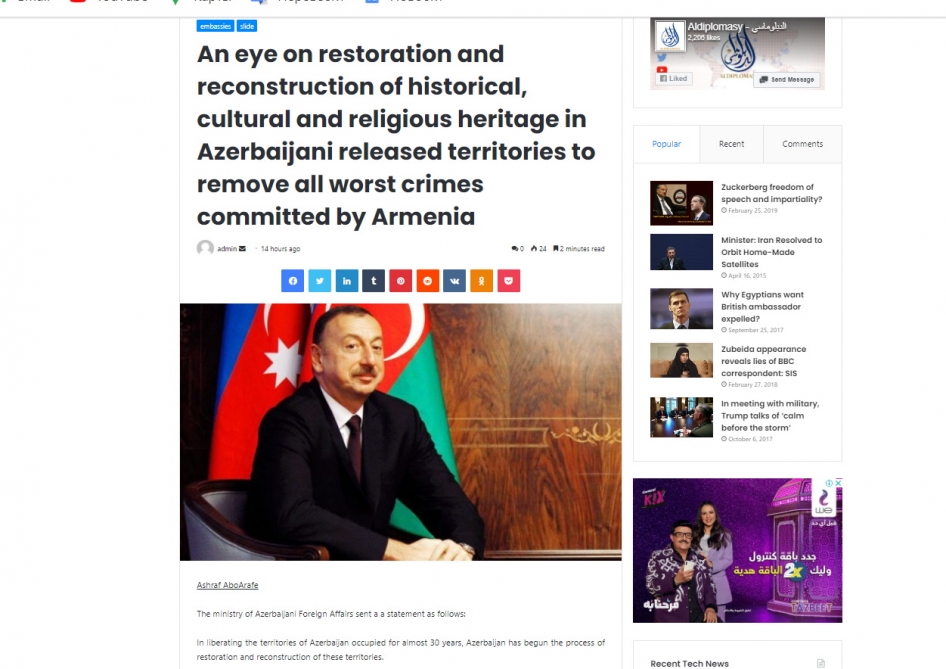 The Egyptian Aldiplomasy news portal has published an article headlined “An eye on restoration and reconstruction of historical, cultural and religious heritage in Azerbaijani liberated territories to remove all worst crimes committed by Armenia”.

The article, citing the commentary by the Ministry of Foreign Affairs of Azerbaijan on the statement of Armenian Foreign Ministry regarding the restoration work carried out by Azerbaijan in Shusha says: “In liberating the territories of Azerbaijan occupied for almost 30 years, Azerbaijan has begun the process of restoration and reconstruction of these territories. At present, huge reconstruction works are being carried out in these territories, including the restoration of our historical, cultural and religious heritage, which was destroyed during the decades-long Armenian occupation.”

“Mosques, historical monuments, mausoleums, house-museums, as well as the Gazanchi Church are being restored in the frame of large-scale reconstruction work in Shusha. We would like to note that, this reconstruction is carried out in accordance with the original architectural style in order to restore the historical image of Shusha. At the same time, we would like to emphasize that the discovery of the remains of the “Iskander-M” rocket 200 meters from the Gazanchi Church in Shusha and, fortunately, the fact that this tragedy did not happen, showed that Armenia is ready to destroy the entire city, including the church it “values”,” the article mentions.

“A country that has caused all these atrocities and violations of international obligations has no moral or legal basis to comment on the reconstruction work carried out by Azerbaijan on its territory,” the article emphasizes.