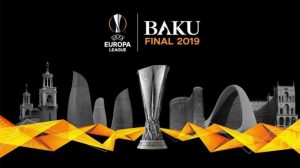 A museum dedicated to the UEFA Europa League will be set up between December 22 and January 7 as part of preparations for the final game to be held on May 29, 2019.

Those who want to touch the unforgettable moments in the history of the Europa League will be able to enjoy the opportunity for 17 days, AFFA reports.

Moreover, special screens to be installed inside the museum will display unforgettable moments of the Europa League, goals netted in the final games and other interesting episodes.

This will allow every visitor to travel into the past of the Europa League, one of the most prestigious club tournaments of the Old Continent, and relive the atmosphere of those years.

The museum will be available to the public between 15:00 and 22:00 every day from December 22 until January 7. Access to the Hall of Fame (the museum dedicated to UEFA Europa League) will be free of charge.

The final of the Europa League will be held in Baku in 2019. This decision was made at a meeting at the European House of Football in Nyon, where the UEFA Executive Committee gave the Baku Olympic Stadium the right to host the final match of the second most important club tournament.

Baku Olympic Stadium is a 68,700-seat stadium, designed and constructed to meet the international standards for stadiums set by the Union of European Football Associations (UEFA), the International Federation of Association Football (FIFA) and European Safety and Stadiums Management Association (ESSMA).

The venue will host games for the Azerbaijan national football team as well as concerts. Baku Olympic Stadium fulfils FIFA’s and UEFA’s highest technical recommendations and elite obligations for football stadiums and is automatically qualified to arrange tournaments and qualification games in European Football Championships.

The stadium already hosted athletics, ceremonies during 1st European Games in 2015, UEFA U-17 European Championship in 2016, 4th Islamic Solidarity Games in 2017, UCL group stage matches of Karabakh FC. Next year it will become the venue for Europa League Final 2019 and Quarter-finals, as well as Group stage matches during UEFA Euro 2020.