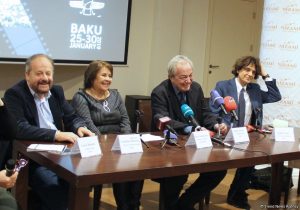 First ever Italian-Azerbaijan Film Festival has kicked off in Baku.

The event was co-organized by the Imago Group and Sandro Teti Editore, the United Culture Center, with the support of the Culture Ministry of Azerbaijan.

A press conference was held as part of the festival, Trend Life reported.

The head of the jury of the festival Remo Girone, artistic director of the festival, director and screenwriter Claudio Rossi Massimi, representative of Imago Group Lucia Machaleni, President of Sandro Teti Editore Sandro Teti, head of United Cultures Paola Casagrande, representatives of the cinematography department at the Ministry of Culture Almaz Sultanzade attended the conference.

Italian actor and Director, known for his role in the film “La Piovra”, Remo Girone stressed the importance of the festival.

“I visited Baku for the first time and know that Azerbaijan is very fond of Italian cinema. The film festival will contribute to the further strengthening of cultural ties between Azerbaijan and Italy, will help to establish contacts, mutual enrichment of cultures, exchange of experience and further implementation of joint projects. Unfortunately, Italy is poorly aware of Azerbaijani cinema, but I think that after this festival they will learn, because our goal is to popularize the cinematic language of the two countries, its history and evolution and propaganda of the past, present, and future of cinematography,” said Remo Girona.

The actor noted that after 30 years in Azerbaijan there are still many admirers of the series “La Piovra”.

“I played a negative hero in this picture and did not even think that it would bring me so much success. You do not care what role you play in your work, the main thing is I left the audience with emotions in my heart. I played in many films, there were negative and positive roles, but the role of Tano Carridi is a red line through my work,” said Girona.

He also expressed a desire to take part in the Azerbaijani project and return to Baku again.

For five days, Remo Girona will not only take part in the festival, hold a master class, but also take a tour of the sights of Baku, visit the Temple of Atashgah, Gobustan reserve and other places.

First ever Italian-Azerbaijan Film Festival will run until January 30.

The film screenings are divided into three parts – Italian, Azerbaijani and international.

The festival presents the work of both beginners and famous directors from around the world.

The main purpose of the event is to identify young talents, to create a platform for the exchange of experience between directors from different countries. Guests of the festival will be actors and directors from around the world. The festival program is also full of seminars, creative debates, meetings.

Fifteen selected films by Azerbaijani and Italian juries will be screened during the festival.

Winners will be awarded with special prize “Zoroaster Award” on January 30.