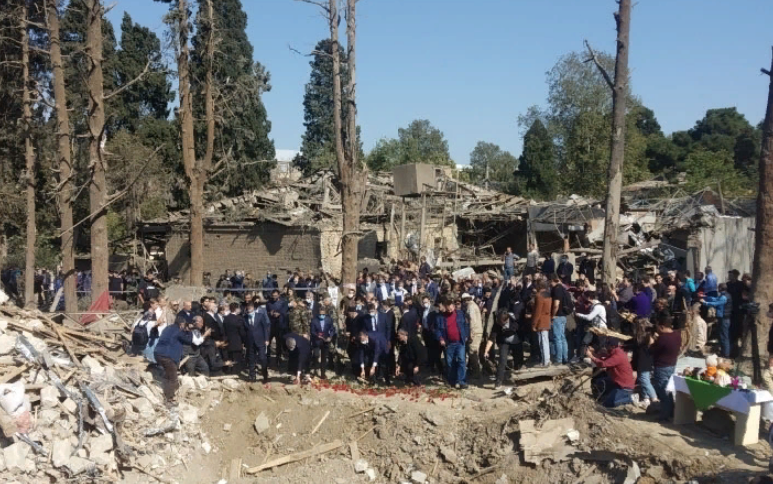 Heads of diplomatic missions in Azerbaijan, ambassadors, military attaches, and heads of representations of international organizations in Azerbaijan visited Ganja on October 12 following deadly Armenian missile attack on the city.

Nine civilians were killed and 33 others were injured as Armenia launched a missile attack in Azerbaijan’s second largest city Ganja that is far from the conflict zone. The attack was made on October 11, at 2 AM, less than 24 hours after the Russian negotiated humanitarian truce entered force.

The diplomats were accompanied by Assistant to the President of Azerbaijan, Head of Foreign Policy Affairs Department of the Presidential Administration Hikmat Hajiyev.

The visit aimed to acquaint the diplomats with Armenia’s reckless missile attacks against civilians and energy infrastructure.

Forty-one Azerbaijani civilians have been killed in Armenian attacks on densely-populated areas so far.

The diplomats will also visit the Mingachevir city that houses the country’s Hydroelectric Power Station and has come under Armenian missile attacks several times since September 27.

It should be noted that since the truce on October 10, Armenian forces have also been shelling Azerbaijan’s civilian areas in Goranboy, Tartar, Aghdam and Aghjabadi districts. Azerbaijan has destroyed three Armenian UAVs since October 11 – one near Mingachevir Hydro Power Plant, two near Aghdam and Tovuz regions.

Armenian armed forces have also opened fire at a sanitary medical vehicle, clearly marked with a white flag, that was collecting the bodies of Armenian soldiers in the area of Sugovushan. A medical worker was seriously injured as a result of the attack.

Azerbaijan has responded by liberating a number of villages, Jabrayil city and Hadrut town as well as important strategic heights.