Foreign Minister: Estonia is interested in deepening relations with Azerbaijan 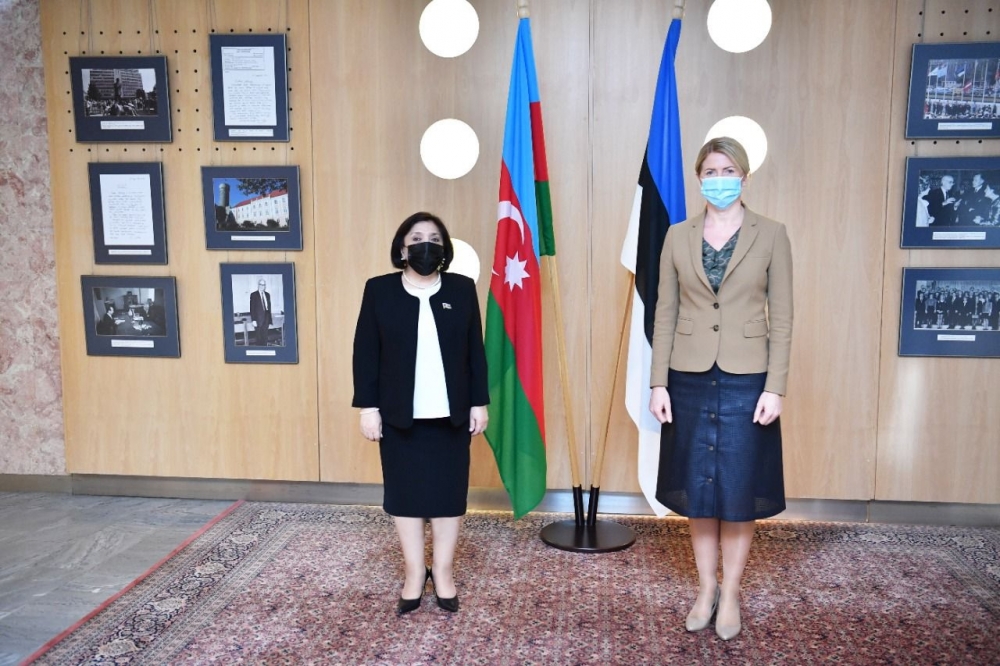 Estonian Foreign Minister Eva-Maria Liimets has underscored her country’s interest in making its relations with Azerbaijan yet deeper and lauded the roles of the Azerbaijani and Estonian legislatures in this context as she met with Speaker of Azerbaijani Milli Majlis Sahiba Gafarova.

Eva-Maria Liimets pointed out the exclusive role of mutual visits in the furtherance of the bilateral relations. “The Azerbaijani-Estonian ties are setting sound standards; successful projects are undertaken in various fields including education and e-governance,” Liimets said.

“Estonia has always supported the territorial integrity of Azerbaijan and finds it important to keep peace and security in the region,” Liimets said adding that restoration of all the regional communications would help this cause tremendously.

Speaker of Milli Majlis Sahiba Gafarova hailed the relations between Azerbaijan and Estonia as two friendly states and partners. Sahiba Gafarova also referred to the exceptional contribution of high-level visits and meetings to the development of relations. She mentioned the state visit of President Ilham Aliyev to Estonia and the official visit of the President of Estonia to Azerbaijan in this regard. “The joint statements signed during those visits laid a foundation for the continued growth of the interstate relations,” Gafarova added.

“Today, Azerbaijan and Estonia have at their disposal vast opportunities to bolster cooperation in the transport sector. The North-South and East-West transport corridors are crossing Azerbaijan, which has allocated immense funds towards the costs of developing the transport infrastructure. The launch of the Zangazur Corridor and the re-opening of all the communications in the region will greatly add to its transport potential,” Gafarova pointed out.

Sahiba Gafarova briefed Eva-Maria Liimets on the Azerbaijan-EU relations in view of Estonia’s membership in the European Union. She remarked that the new Azerbaijan-EU partnership agreement talks were at a final stage with more than 90 per cent of the provisions of the document accommodated already. “The energy cooperation with Europe matters much as well. Apart from being a supplier of crude oil, Azerbaijan also acts as a reliable source of natural gas for Europe by virtue of the South Gas Corridor and this is another important contribution in the Continent’s energy security,” the Speaker noted.

Speaker Gafarova also highlighted the new reality that had set in across the region following Azerbaijan’s victory in the 44-day Patriotic War of 2020. She pointed out that Azerbaijan liberated its own lands after thirty years of Armenian occupation and made the national territory whole again thanks to that victory. “Besides, Azerbaijan had thusly enforced the four resolutions of the UN Security Council as well as the international law’s principles and standards all by itself. The conflict is in the past whereas Azerbaijan is busy restoring its freed lands on a large scale and furthering creative, construction work in those territories,” she added.

Sahiba Gafarova drew her Estonian counterpart’s attention to the fact that Armenia had destroyed all the towns and villages it had captured, had plundered Azerbaijani historical, cultural and religious heritage utterly during the thirty years of occupation. “So, now, Azerbaijan is restoring those provinces depending on its own devices only. Azerbaijan wants peace and has made a number of proposals for the signing of a peace treaty,” Sahiba Gafarova emphasized.

During the meeting, the sides also exchanged views on other issues of mutual interest.