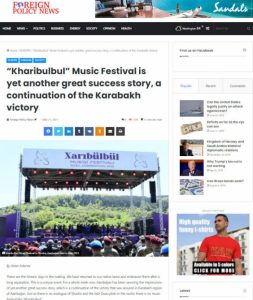 The US-based Foreign Policy News has published an article by Chairman of the Board of AZERTAC, OANA Vice-President Aslan Aslanov highlighting the “Kharibulbul” music festival held in the liberated from Armenian occupation Shusha city.

The article headlined “Return of “Kharibulbul” and messages to world from Shusha” says: “These are the days that have gone down in history. We have returned to the native land and embraced it after a long separation. This is a unique event. For a whole week now, Azerbaijan has been savoring the impressions of yet another great success story, which is a continuation of the Karabakh Victory. Just as there is no analogue of Shusha and the Jidir Duzu plain in the world, there is no music festival like “Kharibulbul”.

“On these exciting days, I wanted to share with the readers my thoughts and impressions about Shusha and the festival. As an introduction, let me note that this was the return of “Kharibulbul”, another vivid demonstration of the Azerbaijani model of multiculturalism from our ancient land of Shusha, as the world received instructive moral and political messages through the language of music.

It is no coincidence that the “Kharibulbul” music festival, which was held for the first time after a long pause, was dedicated to the blessed memory of our martyrs,” the article says.

The article also highlights important messages sent to the whole world during the “Kharibulbul” music festival.

“I think one of the most important messages have been the sincere publications of First Lady Mehriban Aliyeva on social networks, as well as the footage taken by festival participants during a walkabout in Shusha. These publications and footage explicitly show that life in this ancient city is already in full swing and that restoration is going on everywhere. The UNESCO officials refusing to come to Karabakh to document the acts of barbarism committed in the destroyed cities and villages during the years of occupation must have seen this footage too. They must have seen the diligence and precision with which restoration work is being carried out here,” the article emphasizes.