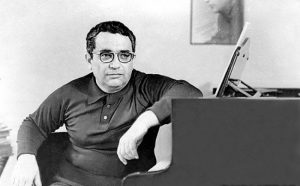 Gara Garayev, the world-known Azerbaijani composer, was born in Baku in 1918.

Garayev was a student of Shostakovich whose music is heavily indebted to the music of his native Azerbaijan. Gara Garayev and Russian composer Shostakovich were surrounded by an intimidating vacuum. Gara Garayev remained one of his most faithful and devoted friends.

In the 1950s in a single impulse of inspiration, Gara Garayev created his best works, the ballets Seven Beauties and Path of Thunder. Gara Garayev left a deep imprint on the musical culture not only of Azerbaijan, but around the world.