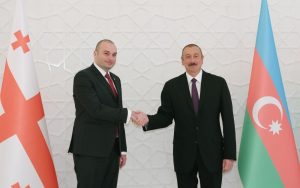 Prime Minister of Georgia Mamuka Bakhtadze made a phone call to President of the Republic of Azerbaijan Ilham Aliyev on December 24.

Mamuka Bakhtadze congratulated President Ilham Aliyev on his birthday, and wished him new successes in his presidential activity and the best of health.

President Ilham Aliyev thanked for the attention and congratulations.

During the phone conversation, Azerbaijani President Ilham Aliyev and Georgian Prime Minister Mamuka Bakhtadze hailed the development of bilateral relations between the two countries in a variety of areas and expressed their confidence that Azerbaijan-Georgia ties will continue developing successfully in 2019 too.

Previous Work of Israeli playwright presented in Baku
Next Farmers to gain enormous benefits from “Green corridor” on customs borders of Azerbaijan: minister