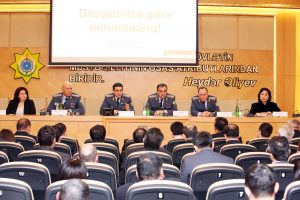 A meeting devoted to granting the right to permanent use of the Green Corridor pass system, suspension, cancellation and restoration of this right was held at the State Customs Committee (SCC) on January 12.

Chairman of the State Customs Committee, heads of main departments, representatives of the Center for Communication and Analysis of Economic Reforms, the World Bank and the U.S. Chamber of Commerce in Azerbaijan attended the meeting.

The granting of the right to use the Green Corridor pass system is aimed at creating more favorable conditions for participants of foreign trade operations who comply with the requirements of the law in export-import operations, and also contributes to the acceleration of goods turnover across the customs border, the implementation of more flexible and transparent customs control, the facilitation of international trade, having established relations between officials and businessmen in import-export operations on the basis of modern management principles.

The first deputy chairman added that the new system contributes to the formation of the principles of mutual trust between entrepreneurs and customs authorities, which will play an important role in the growth of export potential, foreign trade and economic power of the country.

The meeting was organized with the aim to provide information to business entities on the procedure for filling out the application form for obtaining the right to permanent use of this system.

Previous Azerbaijan, Republic of Korea sign Framework Agreement
Next Shahriyar Mammadyarov to take on Anish Giri in third round of Tata Steel Masters