Home / featured / Hikmat Hajiyev: The actions of Armenia need to be strongly condemned by international community and EU as well

Hikmat Hajiyev: The actions of Armenia need to be strongly condemned by international community and EU as well 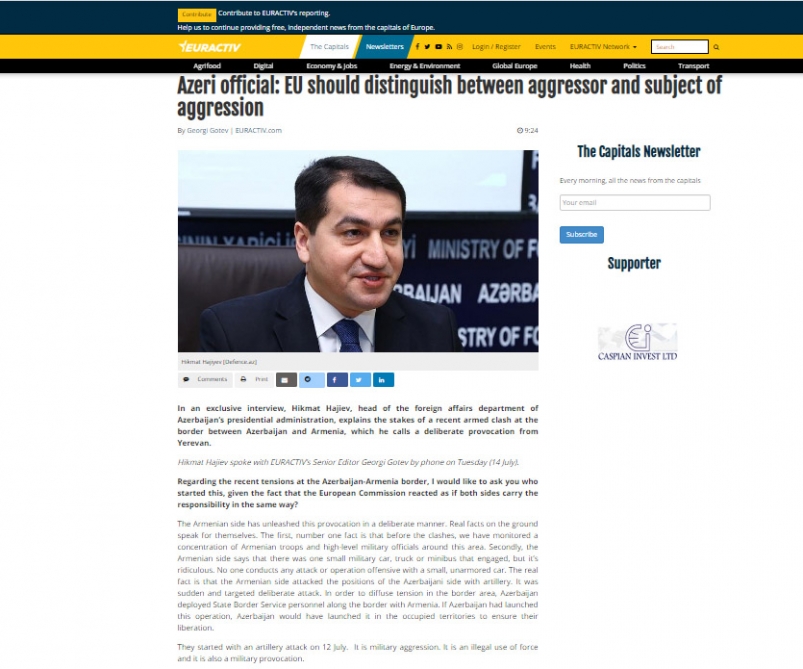 In an exclusive interview with EURACTIV portal, Assistant to the President of Azerbaijan, head of Foreign Policy Affairs Department of the Presidential Administration Hikmat Hajiyev explained the stakes of a recent armed clash at the border between Azerbaijan and Armenia, which he called a deliberate provocation from Yerevan.

He spoke with EURACTIV’s Senior Editor Georgi Gotev by phone on Tuesday (14 July). AZERTAC presents the full text of the interview.

-Regarding the recent tensions at the Azerbaijan-Armenia border, I would like to ask you who started this, given the fact that the European Commission reacted as if both sides carry the responsibility in the same way?

-The Armenian side has unleashed this provocation in a deliberate manner. Real facts on the ground speak for themselves. The first, number one fact is that before the clashes, we have monitored a concentration of Armenian troops and high-level military officials around this area. Secondly, the Armenian side says that there was one small military car, truck or minibus that engaged, but it’s ridiculous. No one conducts any attack or operation offensive with a small, unarmored car. The real fact is that the Armenian side attacked the positions of the Azerbaijani side with artillery. It was sudden and targeted deliberate attack. In order to diffuse tension in the border area, Azerbaijan deployed State Border Service personnel along the border with Armenia. If Azerbaijan had launched this operation, Azerbaijan would have launched it in the occupied territories to ensure their liberation.

They started with an artillery attack on 12 July. It is military aggression. It is an illegal use of force and it is also a military provocation.

Also, as a result of the attack, our soldiers have been killed and in the initial phase, there were no casualties from Armenia’s side. It also once again demonstrates the fact that the attacking side was Armenia. Why has Armenia done such an attack? Because they want to create a new source of tension in the region and a new source of conflict in the region, particularly in the border area of two countries. And we also see the Armenian side tries to derail the negotiations process by all means, to not liberate Azerbaijani territories. Once they feel the pressure, they try to create a new military provocation, so to evade their responsibility. Third, we also see a declining social-economic situation in Armenia. The situation is becoming worse, particularly in the list of spreading of COVID. The Armenian government is trying to deflect public attention and anger. They are also seeking yet another purpose, maybe to involve the political-military organisation of which they are member, to this conflict. This is yet another risky and dirty game of the Armenian side. Even in this institution, no country believes Armenia and they also understand that it is hypocrisy.

But on the Armenian side, on the contrary, will see further militarization of the border of two countries and deployment of heavy armaments and artillery. They attacked Azerbaijan’s positions with the use of artillery as a sudden attack. Four servicemen of the Azerbaijani armed forces have been killed and five others have been wounded. And since yesterday evening, there was an intensive shooting and there are casualties from our side as well. Unfortunately, such irresponsible actions of Armenia are not only limited to this incident, targeting the military.

Attacking civilian objects and civilians is the modus operandi and the rule of engagement of Armenian armed forces. In the border area and also in the line of contact they regularly attack Azerbaijani civilians. When they are seeing their weaknesses in the battleground and fail in diplomacy they resort to attacking civilians. Along the border, Aghdam and Gushchu villages of Azerbaijan since yesterday have been heavily bombarded by the artillery of Armenia. Today, we regret that one 76-year-old man was killed as a result of an Armenian artillery attack. And some other civilian objects suffered damages as well. It once again demonstrates that Armenia is flagrantly violating international humanitarian law, including the Geneva Conventions.

-Do you think there is a strategy to involve Russia under the military agreement Armenia has with Russia, the Collective Security Treaty Organization (CSTO)? Do you think that under this agreement, in the case of conflict, Russia is obliged to provide military assistance to its ally Armenia?

-Actually, we took note of the statement from the ministry of foreign affairs of Russia that said that there should be a demonstration of restraint and also there is a statement by OSCE Minsk Group co-chairs that also calls for negotiations and restraint. Maybe it’s one of the bad intentions of Armenia to involve other institutions or organizations of which they are a member in their conflict process. But we remain assured that all countries understand the situation very well and hiding ill intentions of Armenia.

Armenia by committing this border provocation tries to evade responsibility for the occupation of Azerbaijani territories – Nagorno-Karabakh and seven adjacent regions. Azerbaijan has good neighbourly relations and strategic partnership with Russia. What Armenia is doing now on the border area is a continuation of the policy of military aggression of Armenia against Azerbaijan. The whole international community is fighting against COVID. Under these circumstances, the United Nations Secretary-General also made an appeal to all countries about a global ceasefire initiative. Armenia, by saying that they support this initiative and then flagrantly violating the ceasefire regime, attacking Azerbaijani positions with heavy artillery, demonstrates their true face. It is hypocrisy and nothing else. And we also see the further spread of coronavirus as a result of inactions or disabilities of the Armenian government. Therefore, under such circumstances, to evade attention from the socio-economic difficulties under the policy of Azerbaijani phobia, they would like to direct public anger and public dismay to the conflict.

-If the strategy of Armenia is to involve their Russian ally, it should be reminded that your country, Azerbaijan has excellent relations with Russia, and overall, Azerbaijan’s policy is to have good relations with all major players. Do you think that there is any risk that Russia will play Yerevan’s game?

Azerbaijan and Russia have a strategic partnership relationship, and we have open channels of dialogue in all spheres. Russia is an OSCE Minsk Group co-chair country and strives for the resolution of the conflict. And since the start of this outbreak in the border area, we have seen the diplomatic engagement of the Russian side, along with some other countries for the diffusion of the situation. But this is the hypocrisy of Armenia, they have such bad intentions to involve to political-military institutions of which they are member in the conflict. That’s probably one of the reasons that Armenia decided to launch overt provocation against Azerbaijani armed forces. The OSCE Minsk Group is the only mandated institution to deal with the resolution of Armenia-Azerbaijan conflict. The UN Security Council resolutions and Helsinki Final Act constitute their mandate.

-Do you think the European Union understands the situation?

-I think the EU and EU countries have a better understanding of the situation. From our side, we are also trying to inform our EU partners. The EU also made a statement on this recent escalation. The Commissioner on foreign and security policy talked to our foreign minister. But we expect more addressed statements from EU to distinguish between the aggressor and those who have been the subject of aggression. The actions of Armenia need to be strongly condemned by the international community and EU as well. The impunity of Armenia encourages Yerevan to new military adventures and provocations. We also expect that the EU should assess the illegal activities of Armenia in the occupied territories, including the illegal settlement of Armenia in the occupied territories of Azerbaijan.