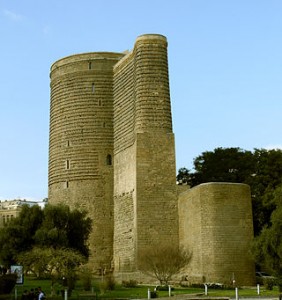 The Maiden Tower The most majestic and mysterious monument of Baku is Gyz Galasy – the Maiden Tower rising in the south-eastern part of the fortress of Ichari Shahar. This unique building of the Azerbaijani architecture does not have any analogues in the East. There are numerous debates on the date of construction and purpose of this monument, at present it attracts the attention, most of all for its unparalleled form. The tower was built on the ledge of the coastal rock and consists of a cylinder 28 m in height and 16,5 m in diameter which was inlaid with local grey limestone. The thickness of the walls at the foundation is 5 metres, and in the upper part 4 metres. On the eastern side a projection, the purpose of which is still unknown
joins the tower. The internal space of the tower is divided into 8 tiers which can shelter more than 200 people simultaneously. Each of the eight tiers of the tower is covered with a stone cupola with a round opening. The light penetrated inside through the narrow window openings of a loop-hole type, widening inwards. The communication among the tiers was carried out with the help of the winding stone staircase, laid in the thickness of the wall. The first tier, like in other Apsheron towers was connected with the second one through an attached or rope-ladder, which could be taken away in case
of danger. Bays are constructed in the same thickness with the walls, inside them are laid a pottery pipe 30cm in diameter. There is a well 21m deep inside the tower, cut in the rock to the water-bearing stratum from the third tier. The water here was clean and fresh.

The construction date of the Maiden Tower has not been fixed yet. Often its construction is ascribed to the XII century. This is the age of the plate with the inscription laid from the outside of the tower. The Cufi inscription, engraved on the plate reads “gubbe (the cupola, vault) of Masud Ibn Davud”. But this plate definitely appeared in the tower later, as it is accidentally and inaccurately fit to the masonry, not above the main entrance, but
somewhere by the side, at a height of 14 m from the ground. Most likely it is a tombstone which was placed in the dent done up in the tower during the repairs. To date the tower two conditions are used. The first – in the construction of the Maiden Tower lime mortar was used, and the oldest building constructed with the mortar was found in Gabala dating to the I century of our era. This is the lowest temporal limit of the age of the tower. The
highest limit can be defined, if the colour of the stone of the Maiden Tower is compared with that of the mosque of Mahammad Ibn Abu-bakr, situated in the fortress and constructed in the years of 1078-1079. Though both of the constructions were made of the same type of the local limestone, the stones of the Maiden Tower are much darker, that is, it is several hundred years older than the mosque of Mahammad. Thus the highest limit is not later than IXX centuries. S.B.Ashurbayli, the well-known historian advanced a supposition on the construction of the Maiden Tower in the first centuries of our era, M.A.Nabiyev – in the VI century of our era. By D.A.Akhundov’s supposition the tower was erected in the VI century BC. L.Bretanitski, the historian of the Azerbaijani architecture considered that it had been erected in two stages: the lower part of the monument up to the height of 13,7 m was constructed in the V-VI centuries, and the upper part was completed in the XII century.

It is also rather hard to define the primary functional purpose of the Maiden Tower. The original construction of the tower as a defence structure gives rise to doubt. It is of little use for a defence because of the small area and the lack of the conditions for a long stay. The existing narrow window openings are directed towards the sea and is not intended to repulse the attack of the enemy. Though it is somehow possible to defend oneself
from the enemy only from the top of the tower. Besides, it has been calculated that it could be possible to build another wall around the city with the stones and lime spent on the construction of the tower. There are versions that primarily the tower was constructed as a temple of fire (the word “Gala”- “tower” has another meaning in Azerbaijani – “to light a fire”), a Zoroastrian hut (that is the tower, where on the top were laid the bodies of the people for the black kites to tear to pieces), an observation point. But it is doubtless that in the XII century this splendid tower was part of the defence system of Baku and was the main citadel of the Baku fortress, one of the most powerful fortresses of the Shirvanshahs. In the XVIII-XIX centuries the Maiden Tower was used as a beacon. The beacon in the tower began to give light since June 13, 1858 but until then a fortress flag had been hoisted on it.Later with the growth of the city the lights of the beacon on the tower began to mingle with the night lights of the city and the beacon was transferred to the Nargin Island (Boyuk Zira).

The tower has repeatedly been restored. During the repairs done in the middle of the XIX century by the Russian military department, the merlons (mashikuli) used for defence purposes disappeared from the top of the tower. The tower was last restored in the 1960s. In 1964 the Maiden Tower became a museum, and since 2000 has been included in the UNESCO list of the monuments.
The word “Maiden” is also found in the names of the other towers in the territory of Azerbaijan and the East and perhaps it means “unsubdued”, “impregnable”. There are a number of legends connected with the etymology of the name of the Baku “Maiden Tower”. According to one of them, the shah fell in love with his own daughter and decided to marry her. Terrified by the forthcoming marriage with her father, and wishing to dissuade him, the daughter asked him to build a tower and wait until its construction was completed. When the tower was ready, the shah did not change his mind. And then the girl climbed the tower and threw herself into the sea.
Closely analysing the legend it is possible to surmise that the possibility of the marriage between the father and the daughter is believed to date the legend back from the pre-Islamic period. Besides this, the legend testifies to the fact that the Caspian Sea was swashing at the very foot of the tower. Irrespective of the etymology of the legend, its plot was the favourite theme of many artists and poets. In 1923 Jafar Jabbarly, the famous Azerbaijani
playwright wrote a poem called “the Maiden Tower”. The first Soviet film made in Azerbaijan in 1924 was also based on the plot of the legend. “The Maiden Tower” is also the name of the first Azerbaijani ballet, composed by Afrasiyyab Badalbayli in 1940.

Previous Museums of Azerbaijan
Next Chronicle of Khojaly Tragedy 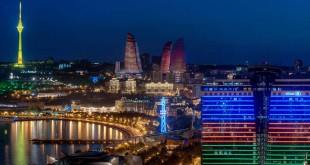