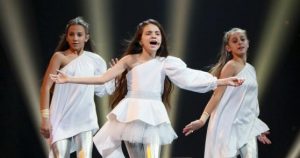 The second rehearsal of the Azerbaijan’s entry at Junior Eurovision Song Contest 2018 Fidan Huseynova was held in Minsk.The singer performed on the stage along with her were four young dancers, Trend Life reported.Fidan Huseynova participates in the competition with the song “I Wanna Be Like You” (“Sənin kimi olmaq”). The authors of the music of the competition song are the famous Azerbaijani composer Isa Melikov and Fidan Huseynova. The composition is in two languages – Azerbaijani and English. The author of the words in Azerbaijani is Ayten Ismihanova, in English – Elvira Michieva.A representative of Azerbaijan in the competition will come on stage seventh.The international children’s song contest “Eurovision-2018” will be held in Minsk on November 25, 2018. The slogan of the competition this year – Light Up.The candidacy of the country’s representative at the song contest was approved during the internal selection at the Public Television of Azerbaijan.Fidan Huseynova became the first at the Testene Art Baku International Art Festival in the vocal category among performers 9-12 years old in 2017. This year, Fidan participated in several projects, including the song “Say Hallelujah” in a duet with Elnur Huseynov.She gained popularity after the Baku concert of Lara Fabian, the girl entered the stage of the Heydar Aliyev Palace and sang the legendary song Je t’aime with her.Fidan was awarded a scholarship, and her name was added to the Golden Book of Young Talents by order of Azerbaijani President Ilham Aliyev in 2016. She also performed abroad in 2018: she travelled to Vienna and Italy. In Vienna, she performed at the concert “Creating the Bridge via songs”, and in Italy, Fidan performed at the Festival in San Remo, where she took 3rd place.For the first time Azerbaijan was represented at the Junior Eurovision Song Contest in 2012 – Omar Sultanov and Suad Alekperov with the song “Girls & Boys” took the 12th place.