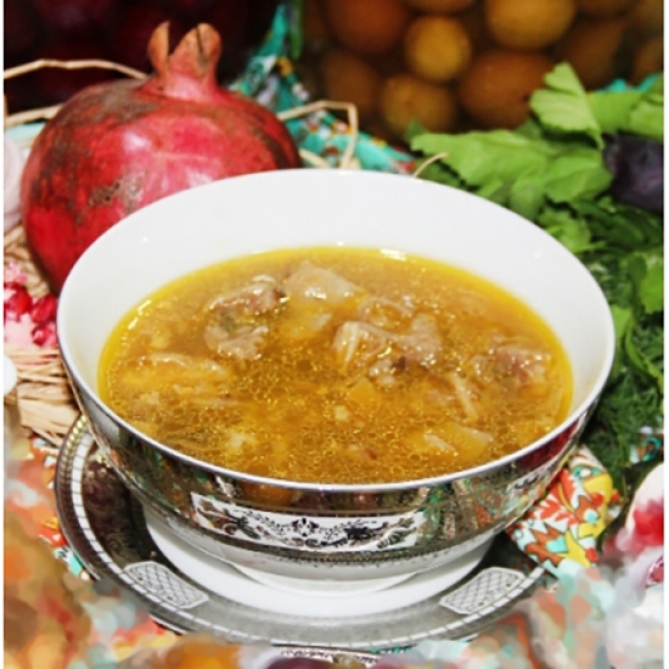 In Karabakh cuisine, meat, preferably lamb, is used more than any other ingredient. Local sheep are valued higher than other breeds. It is called “kasma goyun” (slaughtered sheep) or “atlik” (meat), i.e. “table or meat mutton”. If other breeds yield “pure meat” – from 48 to 52 per cent, the Karabakh breed yields no less than 56 per cent.

The Karabakh breed of sheep has a very large guyrug (rump). Sometimes they have to place a trolley on wheels under the rump. In the bazaars of the Caucasus, experienced butchers preferred to buy Karabakh sheep as they were preferable to others. The meat of black animals was especially valued.

The lamb of the Karabakh breed is used to cook the best kebabs. Making a good kebab is a science, and kebab is a separate culinary specialty. For kebabs, what matters is not only what sheep it is cooked from, but also what side of the sheep the meat is taken from, as well as the sex, age, feeding conditions, what firewood or charcoal are used and how the animal was killed. Kebab is served with fresh herbs, sumakh, narsharab (boiled pomegranate juice), etc. The finished meat is removed from the ramrod with a piece of bread, as if wrapping the finished dish in it.

Yukha made on a saj and lavash from the tandir are more suitable for this. Kebab is sliced meat, while basdirma is Karabakh cuisine meat kept in onion, vinegar or lemon juice before cooking. One of its varieties is lula kebab which is made of minced meat strung on a ramrod in the form of “round cutlets”. Kebab and lula kebab are served with tomatoes, Bulgarian pepper, eggplants and potatoes baked over a fire on a ramrod.

Lamb and beef are used to make govurma (roast meat), sajustu doshama, jizbiz (roasted offals), gavli, dolma, yakhni, baghirbeyin, bozbash (dish made of chopped meat, pea and potatoes), khash (a dish cooked from the hooves of the cattle), kalla-pacha (soup prepared from ram’s, lamb’s or sheep’s head and feet) and various soups. Yakhni and govurma are mentioned in the ancient Turkic monument of Kitabi Dada Gorgud. Khash is mentioned in written sources of the 11th-12th centuries. The meat serves as a garnish (gara) in different forms for pilaf and chilov. In Lachin district, one large dolma meal in cabbage leaves, weighing about 200-350 grams, is served at weddings and funerals. This custom is also widespread in Gabala and Ismayilli districts of Azerbaijan.