Karabakh horses – the heritage of Azerbaijan 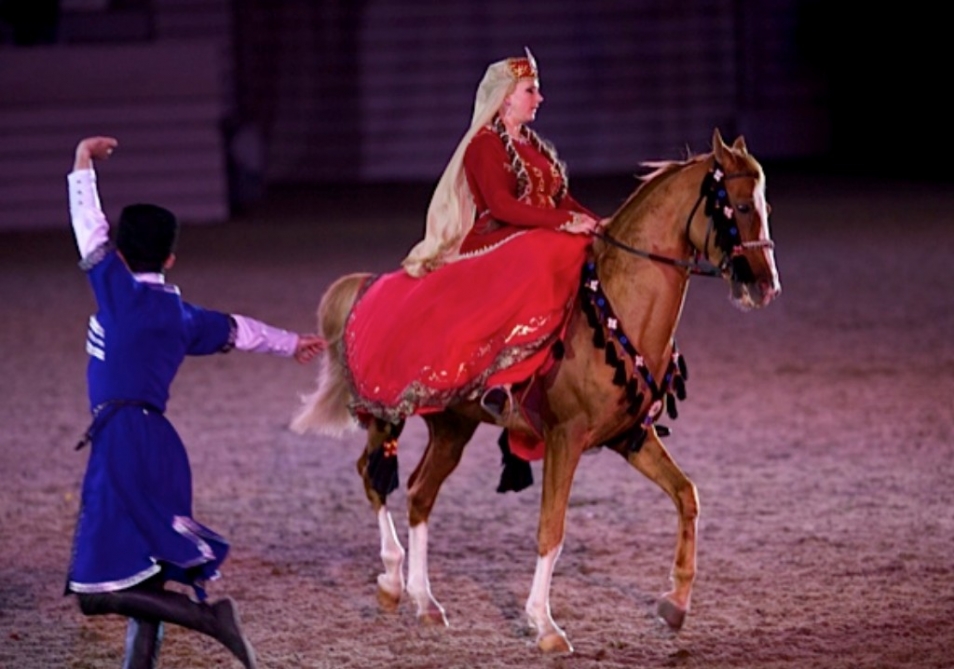 For millennia, the horse was a faithful friend and companion of man. Despite the development of science and technical progress, in the modern world, interest in horse breeding has not changed at all. In Azerbaijan, which is an integral part of the Turkic world, people from ancient times are engaged in breeding horses. Perhaps the most famous Azerbaijani national breed of horses is the Karabakh horse, whose birthplace is Karabakh. However, it can be said that this breed is distributed throughout the territory of Azerbaijan and is developing well in all regions of our country. Karabakh horses are a symbol of the country’s national heritage.

Karabakh horse breed is called one of the oldest in the world. The homeland of this breed is the highlands of Karabakh. The most typical representatives of this breed were kept at the Agdam stud farm, which is considered the breeding core for the Karabakh breed. But in view of the fact that at present, Aghdam is located on the territory occupied by Armenian separatists, all horses from this farm were evacuated to the Agdzhebedi district and placed on Lemberan winter pastures.

Modern Karabakh horses are medium-sized animals, about 144-154 cm high at the withers, with a neck of medium length, a small head, a deep and wide chest, and well-developed muscles. Horses of this breed are distinguished by clear and fast movements, harmonious physique. Precisely because of this, in folklore, the horses of the Karabakh breed were often compared to gazelles. Karabakh horses have a beautiful color. The color of the Karabakh breed can be red, buckthorn, brown, bay, gray or golden-red, which is also called the “golden glow”.

Today there are two subtypes in the breed: long-legged, fast horses with a lightweight body and short-legged, dense and massive. The horses of the Karabakh breed have a dry constitution, their legs are perfectly dry, even after working on the heaviest soil. Very strong hooves, fast recovery after heavy loads, the ability to easily overcome a distance of several hundred kilometers, good fatness at the very meager diet – this is not a complete list of the advantages of this unique breed. Add to this the unpretentiousness of the content and excellent health, cheerful lively disposition and curiosity.

Karabakh racers are calm and friendly animals. Historically, a distinctive feature of the Karabakh horses was the ability to overcome mountainous and rugged terrain. Today, Karabakh horses are mainly used for racing. Horses are known for their exceptional speed. So, in 2004, a horse from the Agdam region set a world record, running 1000 meters in 1 minute and 9 seconds.

For many centuries, these horses were the pride of the Karabakh khans’ stables. The main advantages of the horses of this breed are endurance and loyalty to the owner.

For centuries, the Karabakh breed was bred in the mountains of Karabakh. That is why, in addition to its beauty, these horses are valued, above all, for endurance and the ability to wade along narrow mountain paths. Karabakh horses were mainly used under the saddle. They are particularly hardy in long passages. In the mountains they pass at an accelerated pace up to 10 km per hour. Record speed in smooth horse racing at 1600 m – 2 minutes 9 seconds (1955).

There are historical facts indicating that Karabakh horses were imported into Western Europe in past centuries.

In addition to the remarkable correctness of the exterior and lightness, oriental breed and rare beauty, the Karabakh horses attracted attention with their bright golden color. Any golden horse in the Caucasus could have Karabakh blood.

The breed of Karabakh horses made such an impression on Russian lovers and horse experts that they began to attribute purebred Arabic origin to them, especially considering how strong the dominance of “Arabomania” among horse breeders and scientists was in the XIX century. Professor V. Firsov in his work “Turkestan and Turkestan horse breeds”, published in 1895 in the “Horse-Breeding Magazine”, outlined the history of Central Asia since ancient times. He also mentioned the Karabakh horse as a descendant of the Turkmen argamaks: when the Ottomans, who ruled Khorezm, were defeated in a bitter struggle against Genghis Khan, certain Turkmen tribes left for the South Caucasus and led their horses with them.

The kinship of the Karabakh Keglan with the Turkmen breed is even more confirmed by a careful study of its exterior. The shape of the gummy neck and head, large deep-set eyes, thinness and silkiness of the hair, tenderness and dryness of the constitution, and especially the golden color give the Keglan the same originality and breed that distinguish the brightest Akhal-Teke.

The core of the breed was maintained by the Karabakh khans after the annexation of Karabakh to Russia. The fact that the British bought about 60 mares from Mehdi-Kulihan in 1823 speaks about the qualities of the then Keglan. Great damage to horse breeding of Karabakh was caused by the invasion of the Persians in 1826, but in the following decades the Karabakh horse retained its qualities. At the Second All-Russian Exhibition in 1869, the Karabakh stallions received high marks: Meymun – a silver medal, Hammer (Tokmak) – a bronze one, and the golden-red stallion Aletmez, awarded with a commemorative certificate, was appointed producer to the state stud farms. Karabakh horses were also successful in Europe: the golden-bay Karabakh stallion Khan, presented at an exhibition in Paris in 1867, surprised visitors with its beauty and sturdy build. He was awarded a large silver medal. This horse was estimated at 3,500 francs.

A special commission of the Russian Empire who visited Persia in 1852 wrote that the strength and popularity of the Iranian cavalry is connected with the Karabakh horses, and according to many data, this breed is on the same level with the Arab. The well-known Russian horse breeder KA Diterikhs, relying on facts and sources, notes that the Karabakh breed had a great influence on the development of Russian and European horse breeding.

In the late XIX – early XX century. Karabakh horse breeding fell into decay due to the unsuitability of insufficiently tall Karabakh breed horses for regular cavalry. The plant, founded by the khans and inherited by their descendants, disappeared in 1905. The civil war also played its role: the number of the breed declined sharply. The Keglan mixed with simple mongrel horses, losing much of their breed and becoming smaller in size. From the category of the best oriental breeds, the Karabakh horse migrated to breeds that have only local significance. But these horses also retained traces of oriental blood and a distinctive color, “reminiscent of the color of old bronze,” with darker mane and tail and the same shade of “belt” along the ridge.

In 1949, in order to preserve the breed in the village of Goi-Tepe of the Agdam region, an stud farm was organized, where the most typical mares were collected. To improve the Karabakh breed, mainly to increase the growth of horses, the Arabian and Terek stallions were intensively used. At the time of the opening of the plant, the only Karabakh stallion Sultan stood in it, the remaining stallions (Kadimi 1, Kadimi 2, Contingent, Korf) were purebred Arab. However, even the Arab-Karabakhs were very far from the Khans Keglans, and all the trials of young horses were reduced to smooth racing at the Baku Hippodrome, where, naturally, Arabic hybrids took the advantage.

The wealth of the Karabakh horse breed is preserved and today is supported by horse breeders of Azerbaijan. In many horse farms of the country, elite stallions and mares, inheriting champion breed features of the past decades, are collected. And this precious blood gives new champions – horses of excellent exterior, bright oriental breed and high performance.