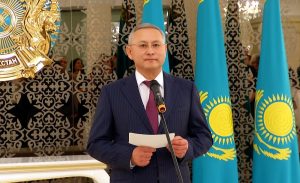 Kazakhstan’s position on expanding cooperation with Azerbaijan is unchangeable, said Kazakh Ambassador Beybit Isabayev, at the official reception on the occasion of the First President’s Day, held at the Embassy of Kazakhstan in Baku.

Addressing the event Beybit Isabayev emphasized that during the years of independence, Kazakhstan has undergone extensive transformation and large-scale reforms.

Kazakhstan is a modern state with a dynamically developing economy, an active participant of international processes, and author of regional and global initiatives, the Ambassador stressed.

The diplomat also hailed the role of Nursultan Nazarbayev in the development of the country in difficult times and stressed that thanks to the efforts of the head of state, Kazakhstan has become one of the developed countries in the short term.