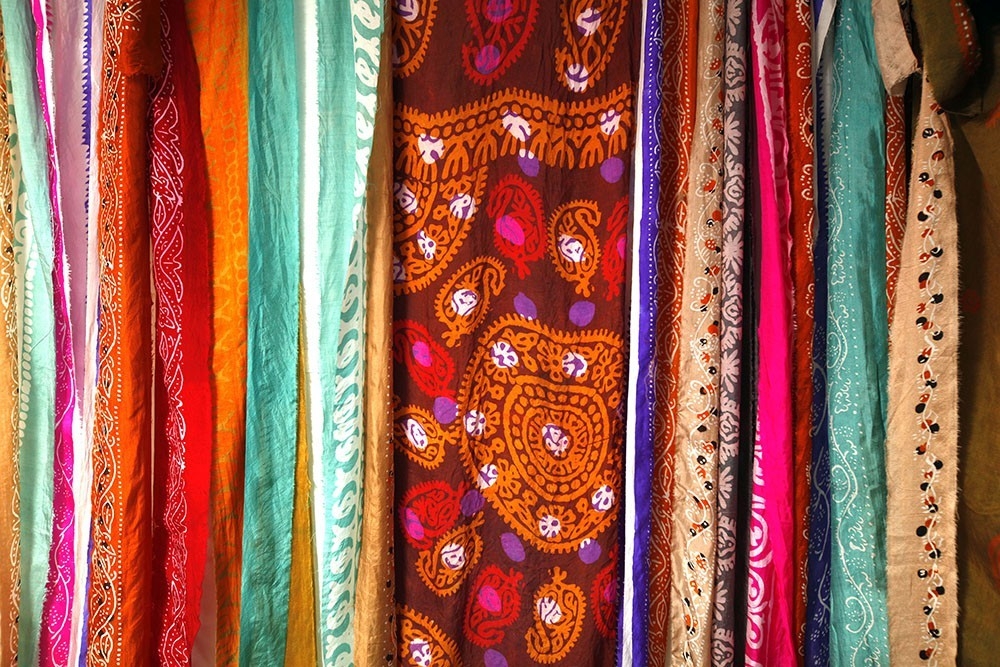 Kelaghayi is a traditional Azerbaijani women’s headwear made of pure silk that has engraved the concepts such as purity, dignity, beauty and peace in Azerbaijani people’s minds being an integral part of the centuries-old cultural heritage of the country.

As a keepsake and fashion accessory, kelaghayi is also very popular today among guests who visit Azerbaijan.

Kelaghayi can be of different colors and sizes, and its edges are decorated with geometric and varied ornaments. The most popular among these ornaments is the Buta. It is assumed that this ornament, widespread in Azerbaijan, goes back to the epoch of fire worship.

Kelaghayi is not only a headwear, its patterns and ornaments embody many features of national life, ceremonies and events related to national and spiritual world of the Azerbaijani people. So, for example, during the matchmaking ceremony, after obtaining consent form the girl’s side, the woman representing the groom’s side presents a wedding wrapped in a red kelaghayi.

The colours of headscarves have symbolic meanings and are often tied to specific social occasions, such as weddings, mourning ceremonies, daily activities and celebrations.

Each kelaghayi has its own philosophy of patterns and its purpose. Red kelaghayi is worn at weddings, white and blue or brown is worn on weekdays, and black at mourning ceremonies.

Using vegetable substances, masters then dye the cloths various colours and decorate them with patterns using wooden stamps, covered with solutions made from rosin, paraffin and solid oil.

Rooted in traditions found along the Great Silk Road, the art of Kelaghayi is concentrated in two locations in Azerbaijan: the historic Silk Road city of Sheki and the Basgal settlement of Ismayilli district.

In Azerbaijan, where sericulture and silk-weaving developed since ancient times, silk fabrics were widely used in national clothes. During the first half of the 19th century, the fame of Basgal silk products went beyond the borders of the country. In 1862, for the first time, Azerbaijani silk was showcased at the International Exhibition in London, where the Basgal weaver Nasir Abdulaziz was honored with a silver medal and a diploma for gentle Kelaghayi and Ganovuz (a very thin bright silk fabric).

The Saint-Etienne company from French Leon, was one of the regular customers of Sheki silk. It is not surprising that at the beginning of the XIX century, for success in the field of silk production, Sheki was called Caucasian Leon, comparing it with the French capital of silk.

The village of Basgal, having the status the State Historical and Cultural Reserve, was known for its silk products, even in the 15th century. Today, “Kelaghayi” Silk Center operates in Basgal, where an interactive museum has been created. Visitors to the museum can not only learn about the history and traditions of kelaghayi, but also watch the manufacturing process and even participate in it.

Famous travelers and diplomats such as Adam Olearius, Anthony Jenkinson, Evliya Celebi, Alexandre Dumas, Fedot Kotov and others visiting Azerbaijan in different years have mentioned about kelaghayi in their travel notes.

In May 2021, the Euronews TV channel’s Cult program, in partnership with Azerbaijan’s Ministry of Culture, has broadcast a special video report headlined “Artisans reveal the secrets of how to make the iconic kelaghayi head scarf”. The report began by saying historic Silk Road city of Sheki in Azerbaijan has long been a centre of silk production and is particularly famous for its headscarves called kelaghayi.

The video report highlighted all three stages of kelaghayi making, which are fabric weaving, dyeing and woodblock decoration. It was also mentioned that the fabrication process of traditional Azerbaijani kelaghayis is a painstaking process that demands skill, and plenty of raw material in question which is silk.

“Hayat Khalilova designs and sells Kelaghayi scarves in her shop in Baku. She explains that there is one way to know whether a Kelaghayi is authentic. If it can pass through a ring easily without getting caught or snagged, then it is genuine,” the program host said.

During the 4th Ethnosport Cultural Festival held in Istanbul on October 3, 2019, by the World Ethnosport Confederation, the equestrian squad and the dance ensemble of the State Border Service of Azerbaijan performed the show-composition “Azerbaijani Kelaghayi and Karabakh Horses”, which was one of the best showcases of promoting the country’s rich cultural heritage and national values.

The uniqueness of the Azerbaijani kelaghayi craftsmanship was proved by its inclusion in the UNESCO`s Representative List of the Intangible Cultural Heritage of Humanity entitled “Traditional Making and Wearing of Women’s Silk Headscarf and Its Symbolism” in November 2014. 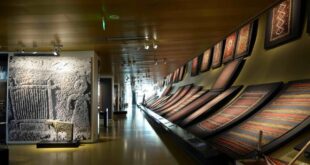