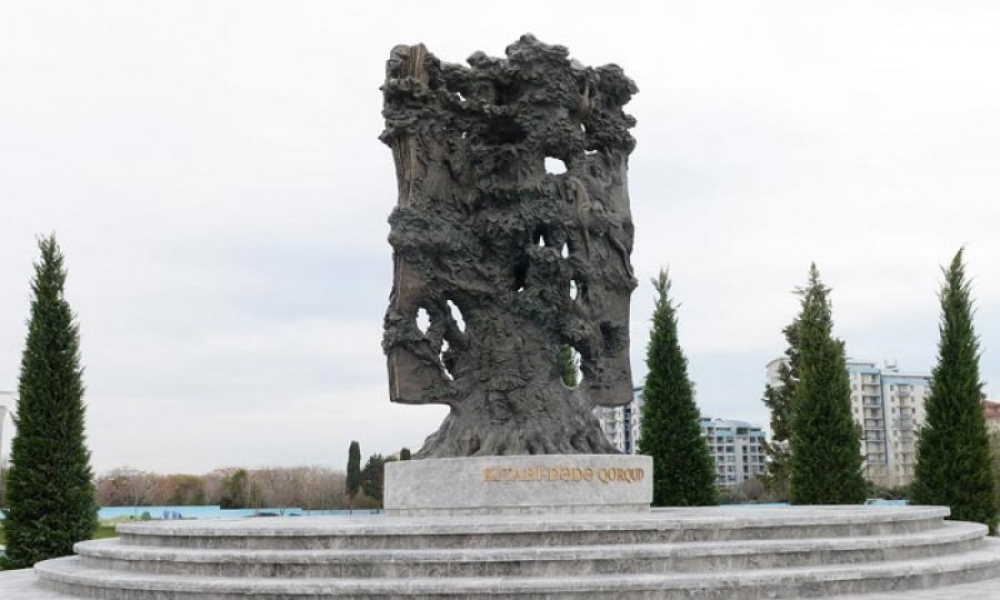 Almost two centuries ago, the world scientific community learned about the magnificent monument of the world, reflecting the historical past of not only Azerbaijani people but also all Turkic peoples– the “Kitabi Dada Gorgud epic”.

In 1815, the German orientalist Heinrich Friedrich von Dietz translated into German and published one of the chapters “Basat kills Tepegoz (cyclopes-like monster from Azerbaijani folklore)” of the epic, which is the pinnacle of the written literature of the Turkic world.

The “Dada Gorgud” epic is a magnificent epic depicting the glorious past of Azerbaijan.

The epic, which has more than a thousand-year history, reflects the heroism, wisdom, and historical past of the Azerbaijani people, spiritual values, customs and traditions of the Oghuz Turks, and Azerbaijani toponyms.

The epic is written in a beautiful poetic language. Moreover, in terms of linguistic terms, the epic goes far beyond the literary works of the Turkic world for its ideological, thematic and artistic richness, and is a cultural monument of humanity. The epic has always attracted the attention of foreign scientists who put out it on a par with folk tales that gave gained worldwide fame.

“Kitabi Dada Gorgud” emerged as a result of the long development of oral folk poetry, and the first legends supposedly in the form of heroic songs in the 9-10th centuries.

The epic is known in writing for two manuscripts of the 16th century, which are stored in the world famous Dresden Library in Germany and the Vatican Library. However, both manuscripts were rewritten from more ancient manuscripts.

“Dada Gorgud” saga is a very reliable and worthy source in the manifestation of history and national identity of Azerbaijan.

Numerous studies on this epic was conducted in the 20th century. In 1975, a feature film was shot (script by writer Anar, directed by T. Taghizade) based on its themes.

In 2000, Azerbaijan celebrated the l,300th anniversary of the magnificent epic “Kitabi Dada Gorgud”. The milestone event was attended by heads of Turkic states and scientists from many world countries. Thus, this epic, finally received its true appreciation in independent Azerbaijan.

It is a heroic poem depicting not an individual hero, but the heroism of the entire nation. Its core idea is to demonstrate the readiness of all heroes, young and old, to sacrifice their lives for the freedom of their land. The glorification of heroism is the essence of the poem, which is very important in the context of the current tasks being faced by the people of Azerbaijan, including defending their independence and the territorial integrity of the Republic.

In accordance with the Order of President Ilham Aliyev on monumental sculptures, memorial and architectural complexes in Azerbaijan, signed in 2007, the Dada Gorgud park was laid in Baku on an area of 6 hectares, and a monument to Dada Gorgud was erected in the center of the park.

In 2015, the United Nations Educational, Scientific and Cultural Organization (UNESCO) hosted an international symposium on the anniversary of the German translation of the epic.

The epic was also translated into various languages, which is a manifestation of a genuine commitment of the Azerbaijani people to promote its rich cultural heritage worldwide.

Chinese edition of “Kitabi-Dada Gorgud” epos, the written Azerbaijani antique monument and Oghuz-Turkic legend, which was presented at the Azerbaijani Embassy in Beijing in May 2017, is one of such efforts towards the preservation and promotion of this precious piece of the national and world heritage.

Noteworthy, it was the first translation of the great monument of Azerbaijani people’s culture to the Chinese language.

In January 2021, the International Turkic Culture and Heritage Foundation, which is actively involved in promoting the rich cultural heritage of Azerbaijan worldwide, hosted the presentation of the book “Korkutname” by the national poet of Turkey Kenan Charbogan, published by the International Organization of Turkic Culture, TURKSOY.

The book was written on the basis of the epic “Kitabi-Dada Gorgud”, which is considered the common heritage of the Turkic world.

The heritage of the ancient epic of “Kitabi Dada Gorgud”, submitted jointly by Azerbaijan, Turkiye and Kazakhstan, was included in the UNESCO Representative List of Intangible Cultural Heritage as an example of a multinational culture of folklore, folk tales and music at the 13th session of the UNESCO Intergovernmental Committee in Port Louis, Republic of Mauritius, in 2018.