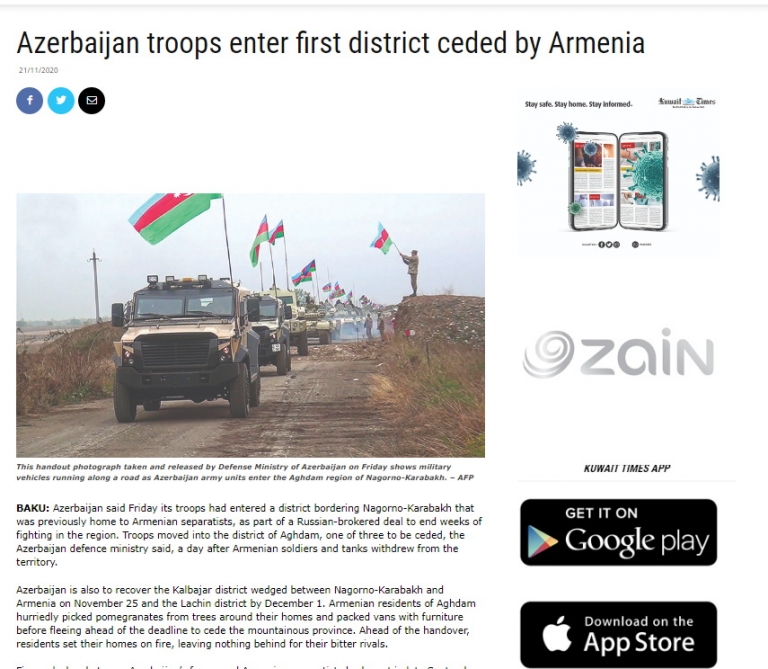 “Azerbaijan said Friday its troops had entered a district bordering Nagorno-Karabakh that was previously home to Armenian separatists, as part of a Russian-brokered deal to end weeks of fighting in the region. Troops moved into the district of Aghdam, one of three to be ceded, the Azerbaijan defence ministry said, a day after Armenian soldiers and tanks withdrew from the territory.

Azerbaijan is also to recover the Kalbajar district wedged between Nagorno-Karabakh and Armenia on November 25 and the Lachin district by December 1. Armenian residents of Aghdam hurriedly picked pomegranates from trees around their homes and packed vans with furniture before fleeing ahead of the deadline to cede the mountainous province. Ahead of the handover, residents set their homes on fire, leaving nothing behind for their bitter rivals.

In a televised address, Azerbaijan President Ilham Aliyev called Armenians who destroyed property as they fled a “wild enemy”. “They are embarrassing themselves in front of the whole world,” he said. On Thursday, people celebrated in Baku, with cars parading through the city with flags of Azerbaijan ally Russia and Turkey. Separatists in Nagorno-Karabakh and several surrounding districts had captured the territory and claimed independence following a post-Soviet 1990s war that left around 30,000 dead. Their claim was not recognized internationally, however, even by Armenia. As part of the peace accord, Armenia agreed to return 15 to 20 percent of Nagorno-Karabakh territory captured by Azerbaijan in recent fighting, including the historic town of Shusha.

A Russian peacekeeping force totalling 1,960 troops has now deployed to the region, the defence ministry said Friday, and set up checkpoints and observation posts along the strategic Lachin corridor that connects Nagorno-Karabakh with Armenia.

Russian President Vladimir Putin said Friday that providing humanitarian aid to residents of “severely hit” Nagorno-Karabakh was now a priority, and called on the UN and the World Health Organization to send delegations to the region. He maintained that the peacekeepers had “helped end the bloodshed and prevent further casualties.” Most of Azerbaijan’s south-western district of Aghdam has been under the control of Armenian separatists since 1993. Before the post-Soviet war it was inhabited by 130,000 people-mostly ethnic Azerbaijanis who were expelled from their homes.

In his national address Friday, Aliyev promised Azerbaijanis that they would return to “ancestral lands”. UNESCO on Friday said that Director General Audrey Azoulay had proposed a preliminary field mission to the region during a meeting with representatives of Armenia and Azerbaijan to ensure the protection of cultural heritage sites.

Armenia’s health ministry said this week that more than 2,400 troops had been killed in the fighting. The agreement to cede disputed territory spurred a political crisis in Armenia with the opposition flooding the streets of the capital Yerevan and calling for Prime Minister Nikol Pashinyan’s resignation. The presidency announced Friday the replacement of defense minister David Tonoyan. Armenian police told AFP they had detained dozens of protesters Friday at a rally in Yerevan where demonstrators calling for Pashinyan to resign formed a human chain and blocked major roads.”

Previous President Ilham Aliyev: A promising new situation has emerged in the region
Next Iranian FM’s visit to Azerbaijan postponed