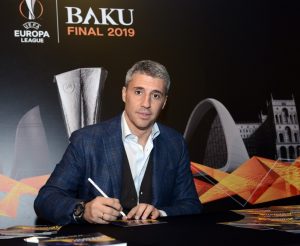 World-renowned Argentine striker Hernan Crespo has arrived in Azerbaijan`s capital as UEFA`s star ambassador as part of preparations for the UEFA Europa League Final to be held in Baku Olympic Stadium on May 29, 2019.

Football fans had an opportunity to get the Argentine star`s autograph and take photos with him at the museum dedicated to UEFA Europa League.

Hernan Crespo won the UEFA Cup with Italian club “Parma” in the 1998/99 season. His name was included in the list of 125 greatest living footballers, which was compiled by Pele on the occasion of 100th anniversary of FIFA in 2004.

On September 20, 2017, the UEFA Executive Committee made the decision to hold the 2019 UEFA Europa League Final in Baku Olympic Stadium.