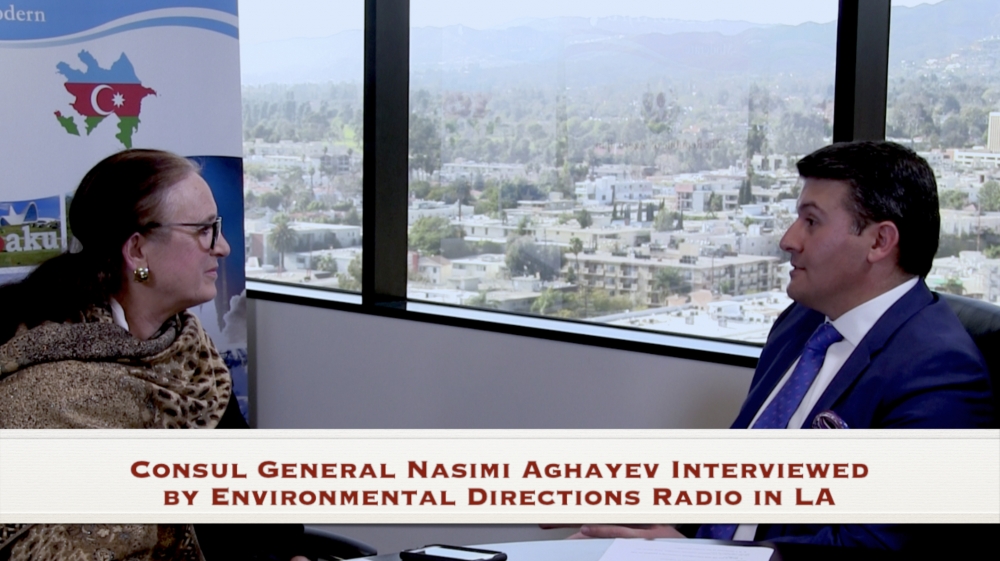 The renowned Los Angeles-based Environmental Directions radio program has interviewed Azerbaijan’s Consul General in Los Angeles Nasimi Aghayev. The host of this weekly international radio program, which was established in 1977, is the three times EMMY nominee, award-winning journalist Nancy Pearlman. The program is broadcast via different radio stations in California and other Western U.S. States.

During the interview, Consul General Aghayev talked about the occupation and ethnic cleansing of Azerbaijan’s Karabakh region by neighboring Armenia in the early 1990s that has resulted in the occupation of around 20 percent of Azerbaijan’s sovereign territory and the expulsion of over 800,000 Azerbaijani civilians from their homes and lands, who are still internally displaced persons in their own country, because of the ongoing occupation. Aghayev noted that despite the four resolutions adopted by the UN Security Council, condemning this military occupation and ethnic cleansing, and demanding that Armenian forces be withdrawn from all occupied territories of Azerbaijan, Armenia still refuses to fulfil them.

The Consul General mentioned that in the course of the occupation, the Armenian troops committed many crimes against humanity, the most horrendous of which was the massacre of 613 Azerbaijani civilians, including up to 250 infants, children, women and elderly, in February 1992 in Khojaly that the Human Rights Watch called “the largest massacre in the conflict” between Armenia and Azerbaijan, placing the direct responsibility for it with the Armenian troops. Aghayev stressed that despite the striking admission of the responsibility for this massacre by Armenia’s former President Serj Sargsyan, its perpetrators have not been brought to justice.

Consul General Aghayev noted the importance of remembering such brutal atrocities and educating the world about them so that the international community becomes more sensitive to such human cruelty when they occur elsewhere and so that they can be prevented.

In this regard, he underlined the highly effective international campaign “Justice for Khojaly” launched in 2008 and led by Leyla Aliyeva, Vice President of the Heydar Aliyev Foundation, which has been instrumental in mobilizing efforts aimed at raising international awareness about the Khojaly Genocide. As a result, more than 10 countries and 23 U.S. States have recognized and officially condemned this genocide. Furthermore, in the United States alone two meticulously researched books were published by American authors, as well as a documentary film “Running from the Darkness” was produced by Los Angeles filmmakers in 2017.

The Consul General noted that unlike Azerbaijan, where people of many different religious backgrounds live together in peace and harmony, Armenia today has become a monoethnic and mono-religious country, where various forms of ethnic and religious hatred such as Azerbaijanophobia and anti-Semitism are on the rise. He mentioned that according to the Anti-Defamation League’s latest survey, with 58 percent anti-Semitism rate, Armenia is the second most anti-Semitic nation in Europe, as well as the third most anti-Semitic in the world outside the Middle East and Northern Africa. Consul General Aghayev stressed in this regard that it is no coincidence that Garegin Nzhdeh, who was an Armenian Nazi collaborator, is considered the national hero of Armenia, and its government has erected his statue in the center of the capital city of Yerevan.

In conclusion, the Consul General stated that today under the leadership of President Ilham Aliyev, Azerbaijan has become a modern nation and an island of stability and prosperity in a challenging region, and that Azerbaijan continues its efforts for the peaceful settlement of the conflict within its territorial integrity.