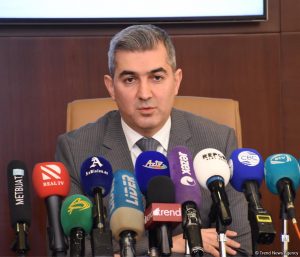 State Migration Service of Azerbaijan has revealed the statistical information regarding the last year.

The number of electronic services provided by the State Migration Service of Azerbaijan has been increased from 11 to 14: through the “ASAN viza” system, the list of electronic visas has been supplemented by an entry labor visa, the head of the Service Vusal Huseynov stated at a press conference, Trend reports.

Huseynov noted that a new mobile application of the MİGAZ Service was developed and presented to the public.

“In addition, a new project was launched on “ASAN Radio” the program “Miqrasiya saatı” (“Migration Time”) is on the air, on Wednesdays to convey information to a wide audience since October 10,” Huseynov said.

ASAN Visa portal designed to simplify a procedure for issuing visas to foreigners and stateless persons wishing to visit Azerbaijan, as well as to ensure immediacy and transparency of this process, was presented to the public in 2016.

Foreigners and stateless persons, who wish to receive an e-visa, must enter information into the system of “ASAN Visa”, and after receipt on acceptance of confirmation pay online a state fee in the amount prescribed by law “On state duty”.

Then a visa is sent to the e-mail address of the contact person. In case of failure the person is also informed.

The electronic visas are not stuck in the passport but presented together with the passport while crossing the border check-point. Foreigners and stateless persons may apply for a new e-visa only after they will leave Azerbaijan.

Foreigners and stateless persons arriving in Azerbaijan can obtain a work visa online in the ASAN Viza system starting from July 6, 2018.

The head of the State Migration Service added that in 2018 the Service’s work was expanded, and at the border checkpoints of Samur, Astara, Shikhly, migration departments began to work around the clock.

He emphasized that, given the significant increase in the number of foreigners on New Year’s Eve, from December 15 of last year to January 15, 2019, monthly check is taking place, information is provided to foreigners through video clips, printed and distributed flyers in Azerbaijani, Russian and English.

The Service has drafted nearly 30 international treaties, including readmission agreements related to the improvement, within the framework of international law, the process of returning compatriots illegally living abroad, protocols on the implementation of these agreements, as well as bilateral agreements on cooperation in the field of migration in order to strengthen relations with the migration authorities of foreign countries.

The number of foreign citizens who have obtained refugee status in Azerbaijan, has increased by 16 percent and today the number stands at 78.

He stressed that five people with refugee status from Libya, 28 – from Afghanistan, two – from Pakistan and 43 – from Iran, live in Azerbaijan.

During the reporting period, 19,210 decisions were made regarding violations of migration legislation requirements.

“The State Migration Service received 27,509 appeals regarding the establishment of citizenship,” he said. “Thus, 464 people were readmitted to Azerbaijan from foreign countries.”

According to the latest amendments to the law, the period of temporary stay in Azerbaijan of foreigners and stateless persons increased from 10 to 15 days.

In this regard, changes were made to the decisions of the Cabinet of Ministers on approving the “Procedure for filling out the visa application form”, the sample “Application form for obtaining a visa” and the sample “Petition of the party inviting a foreigner or stateless person to Azerbaijan”

Moreover, if a party inviting a foreigner or a stateless person is a non-governmental organization, then a copy of the state registration certificate of this structure will be required, a document confirming the reason for the invitation. This document is not required for transit, tourist, official and personal visas.