Home / Azerbaijan / Culture / Movie stars may be awarded in Baku

Movie stars may be awarded in Baku 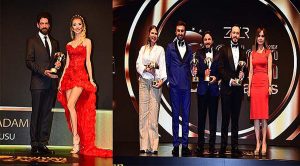 For the first time, Golden Palm Award ceremony may be held in Baku.

This issue will be resolved after the 6th Golden Palm Award, which will be held at the Raffles Istanbul hotel on March 25, Trend Life reported.

The award ceremony will be held with the participation of stars from Europe and Turkey.

The host of the evening will be Akcent и Aleksandra Stan.

Representatives of Azerbaijan from the sphere of culture and art, public life and business, will take part in the event.

Golden Palm Award is the highest prize awarded at the Cannes Film Festival. It was introduced in 1955 by the festival’s organizing committee.

It takes place in the U.S., Mexico, France, Turkey and other countries. The organizer of the project and the chairman of the organizing committee is Nedim Delibash.