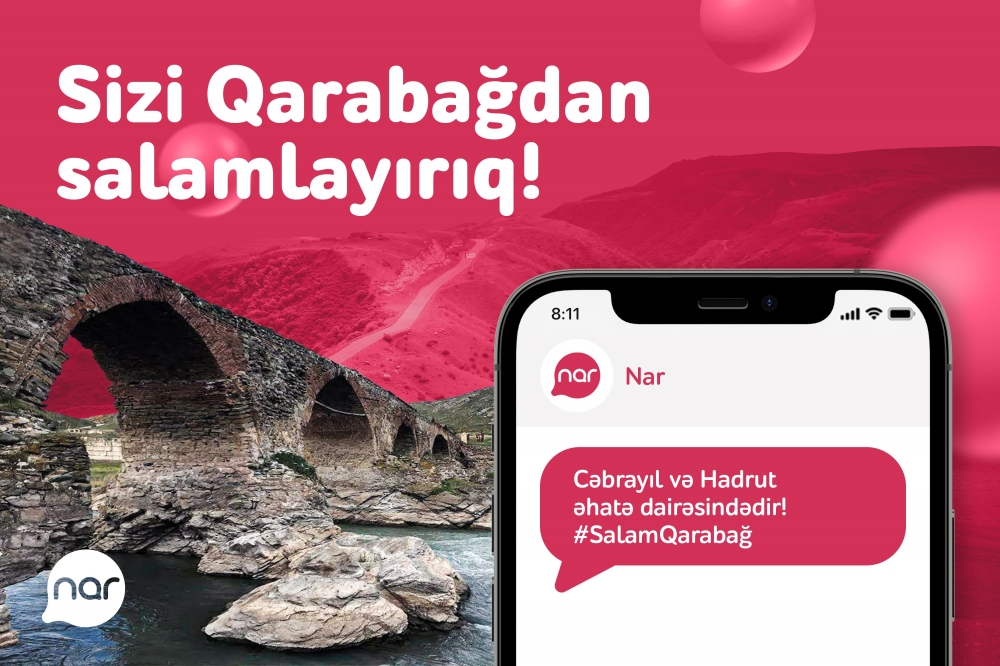 Constantly expanding its coverage across the country, Nar launched its network in the regions liberated from occupation. Thus, 2G, 3G and 4G technology base stations have been installed in Hadrut settlement of Khojavand and Jabrayil. It is worth noting that, within the frame of Karabakh Plan, Nar continues to set up base stations in Shusha with a vision to provide the liberated territories with modern and permanent network infrastructure.

Aiming to provide the population with high-quality Internet, Nar has installed more than 50 new base stations in the first quarter of 2021. Thus, the mobile operator delivers uninterrupted Internet via more than 5670 base stations.

Significantly, during the Great Patriotic War Nar provided mobile communication in the liberated territories through mobile base stations.

‘Azerfon’ LLC (Nar trademark) started its operations on March 21, 2007, and within a short period of time became one of the leading companies of the telecommunications and mobile communication industry of Azerbaijan. The ‘Nar’ brand name was selected as the symbol that resembles the cohesion of the rich cultural and historical heritage of Azerbaijan with the modern life. Being the first operator in the country to introduce the 3G technology, Nar provides the customers with a wide 4G network coverage. With a large network of over 8740 base stations, covering 90% of the country’s territory, Nar provides more than 2.3 million subscribers with the highest quality services. Within the frames of its strategy aimed at continuous improvement of the network quality, the mobile operator has introduced the HD-Voice service, which ensures a significant increase of the quality and flawless transmission of voice.

Previous Azerbaijan, WHO discuss prospects for cooperation
Next Russian analyst talks death of Azerbaijani journalists due to mine explosion in Kalbajar