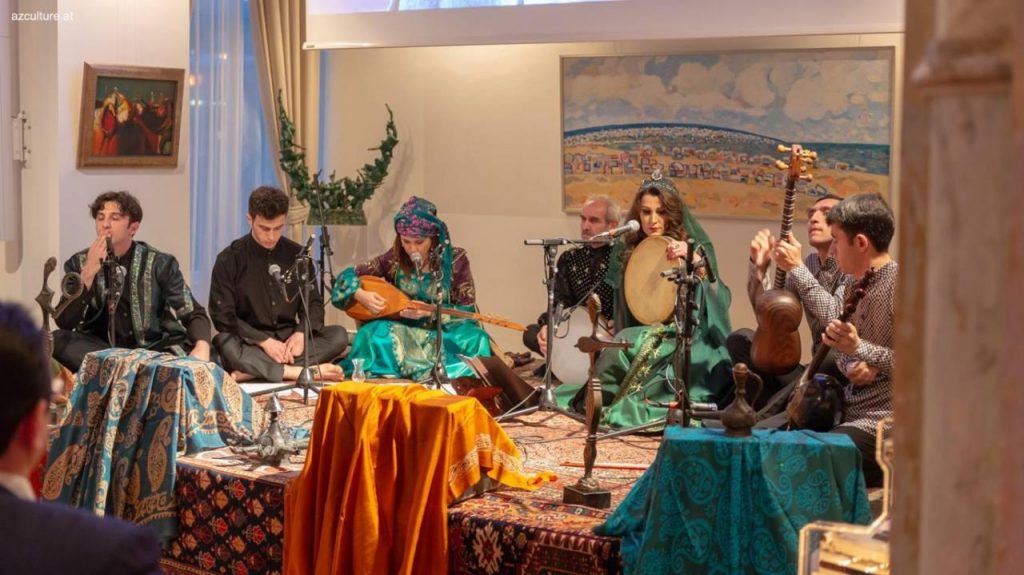 Marvelous concert timed to the 650th anniversary of the great Azerbaijani poet and philosopher Imadeddin Nasimi has been held in Austria.

The show featured fantastic singers who coupled with a fascinating stage set brought the listeners into the magical world of music.

At the event, the head of the Cultural Center Leyla Gasimova and German scientist, Michael Reinhard Hess spoke about the role of an outstanding poet in world literature.

Azerbaijan State University of Culture and Arts presented the literary and artistic program “Bulmusam həqqi …” (I found the truth …”).

Together with talented students and young actors Zia Agha and Mirsanan Kazimi she performed rubai (quatrain).

The concert hall resounded with cheers and applause.

Seyyid Imadeddin Nasimi was a great Azerbaijani poet and eminent figure in the poetry and philosophical thought of the Orient. He was the founder of a school of philosophical poetry in the Azerbaijani language.

Known mostly by his pen name Nasimi, he created a number of works in Azerbaijani, Persian and Arabic.

His poetry is rooted in the social, political and cultural development of the countries of the Near and Middle East, and especially of his homeland, Azerbaijan.

Having thought his life, the poet wrote about 300 poems, including ghazals, qasidas (“lyrics”), and rubais (“quatrains”).

Nasimi’s Turkic Divan is considered his most important work, which contains 250–300 ghazals and more than 150 rubais.

In connection with the 650th anniversary of the great Azerbaijani poet Imadaddin Nasimi, President Ilham Aliyev declared 2019 the Year of Nasimi.

Various scientific institutions, cultural centers, institutions and organizations of ANAS are holding a series of events dedicated to the life and work of Nasimi and organizing exhibitions.

By the way, the first ever Nasimi Festival of Poetry, Arts, and Spirituality was held in Azerbaijan last year.

The event was co-organized by the Heydar Aliyev Foundation and supported by the Azerbaijani Ministry of Culture.

The festival was held under the slogans “Beyond the Limited Self”, reflecting the philosophical views of the poet, and “I am a Particle, I am the Sun” which are the poet’s lines.

Nasimi Festival of Poetry, Arts and Spirituality was also held in Russia.

The festival named after one of the brilliant poets and thinkers of the East, Imadaddin Nasimi took place at the Moscow State University and the Institute of Asian and African Studies.

A scientific-practical conference on “Nasimi’s spiritual heritage in the historical and cultural context of the Middle Ages in the East” was held within the festival.

Influence of Islamic mysticism on the formation of the humanist outlook of the poet, the literary-philosophical heritage of Nasimi and other topics were discussed at the conference.