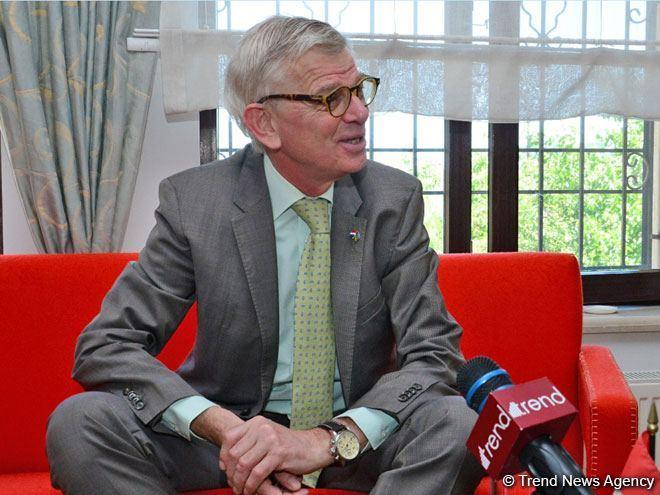 Expressing hope that this project will materialize, the envoy pointed out that currently, there are contacts between the Greenport Venlo on Maas River in the Netherlands and the new Port of Baku at Alat.

The two ports are cooperating in the sphere of logistics, as well as training and education, added Kervers.

He noted that Director of the Baku Port Taleh Ziyadov is very interested in sending his personnel to the Netherlands for education.

Moreover, Kervers said he had contacts with the director of the Academy of State Customs Committee of the Republic of Azerbaijan.

“He is very much interested in working with the Port of Rotterdam Customs to see how in a port you can integrate the commercial process and the customs procedures. Customs is about control, which slows down the logistics. If you can integrate the check for security in a port management system, this will be much more efficient and you will be able to transport and to transit goods very quickly,” noted the envoy.

The Port of Baku is located in Alat (a township 70 km south of Baku), at the crossroads of two major transportation corridors – East-West and North-South. It is also where Azerbaijan’s main railway and highway networks converge, facilitating the implementation of the vision of the port as a grand hub – becoming key to regional and global supply chains. The Port of Baku serves as a major intermodal distribution hub, but will also employ an integrated development model that involves port activities, bonded zone, the Alat township and various transport and non-transport projects.