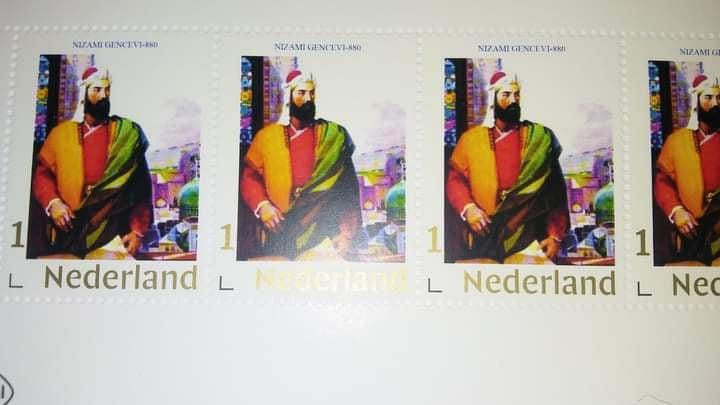 Netherlands PostNL has issued a postage stamp with the Azerbaijani poet and thinker Nizami Ganjavi.

The postage stamp was issued at the initiative of the national dancer Saltanat Ravangizi in honor of the poet’s 880th anniversary.

Notably, numerous other postage stamps have been already issued at her initiative, including those dedicated to famous artist Sakit Mammadov, eminent composer Jovdet Hajiyev, Khari Bulbul flower in memory about the martyrs of the Nagorno-Karabakh War, national hero Albert Agarunov, journalists Siraj Abishov and Maharram Ibrahimov, who died as a result of a mine explosion in Kalbajar, etc.

Nizami Ganjavi is considered one of the most prominent figures of medieval Azerbaijani philosophical poetry.

The poet wrote lyrical poems, including gasidas, ghazals and rubais. He dedicated his whole life to lyrical poems, and different philosophical problems.

The works of Azerbaijani poet and thinker have been translated into many languages.

In Khamsa (Quintet), the poet revealed the living pages of history.

The attack of the Russians on Barda city, a fairy tale of the Russian Princess, the beautiful Shirin amazons, battles, described in various poems of Nizami – all this is historically and geographically related to medieval Azerbaijan and the Caucasus.

Nizami Ganjavi passed away in 1209 in his native city of Ganja. A grandiose tomb was raised over his grave.