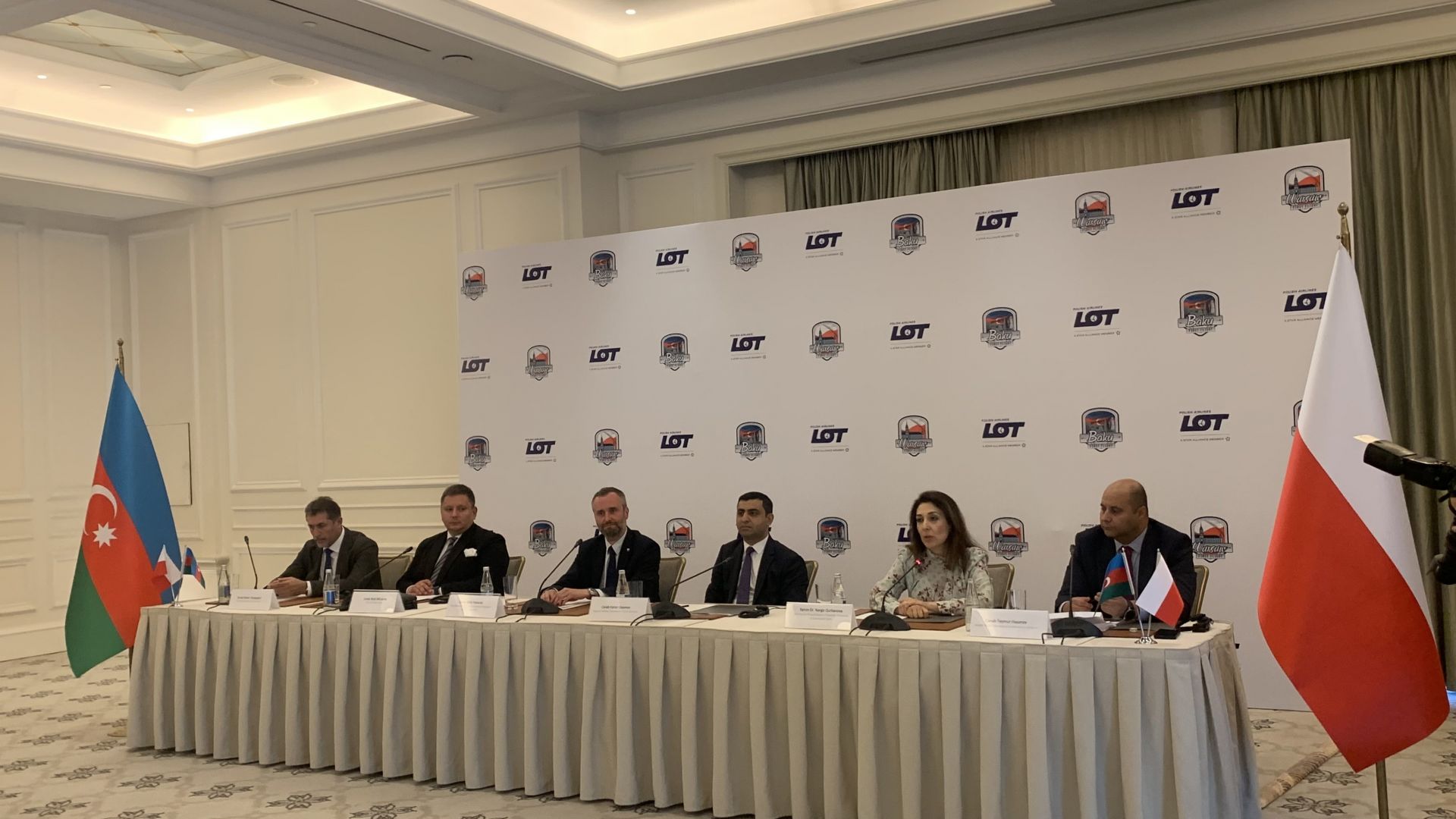 Speaking at a press conference on the occasion of the opening of the first direct Warsaw-Baku-Warsaw flight, Azerbaijan Tourism Board’s Chief of Staff Kanan Gasimov has said that the two countries enjoy strong economic and cultural ties, adding that the opening of the direct flight will further strengthen this friendship with the help of tourism.

“In recent years, the team of the State Tourism Agency, including the Azerbaijani Tourism Board, has been working closely with partners in Poland. We also work closely with the Polish Embassy and Polish tourism organizations to spread among tour operators and tour agencies in Poland about Azerbaijan,” he said.

He added that in the last two years, the Tourism Board has organized several workshops for Polish tour operators and gave detailed information about Azerbaijan and its tourism potential.

“And I think that it really helped us and airlines to open these flights. Having said all this once again I congratulate all the involved parties on the launch of the direct flights between Azerbaijan and Poland. We are confident this will boost tourist flow between the countries,” he said.

Moreover, Polish Ambassador Rafal Poboski emphasized that the opening of the first direct flight between Azerbaijan and Poland is yet another example of good cooperation between the two countries.

“I would like to say that the opening of this new connection between our capitals is also the fulfilment of the declaration signed by our presidents already in 2019. We were both working on this, Polish and Azerbaijani administration, and taking into account how important the interconnectivity is, not only between our countries but in general, I think that this declaration signed by the President Duda and President Aliyev in 2017 manifests how foreseeing the leaders of our countries are and how precisely they give us instructions on what to do,” he said.

The ambassador also noted that during the meeting with tour operators on May 28, the Polish Chamber of Tourism and Azerbaijani Association of Travel Agencies have signed an agreement on cooperation.

“On the very first day. I think this is an example and manifestation of the interest of both sides to develop this connection, to make it successful. We are discussing tourism today, but we see this connection also as the fascinator to boost people to people, government to government contacts, and also exchange of tourism, education and all other cultural projects that we have already discussed with the colleagues here,” he said.

LOT Polish Airlines’ President of the Management Board Rafal Milczaski recalled that this year marks the 30th anniversary of the establishment of diplomatic relations between the two countries.

“I am all the more pleased to announce the launch of the route to Baku. I firmly believe that direct connection will contribute to the further promotion of Polish heritage in Azerbaijan and the strengthening of relations between the two countries. And the legacy of Polish architects in Azerbaijan, in turn, with its beautiful monuments, will enchant tourists from Poland,” he said.

He added that the passengers from Azerbaijan will be able to use the airlines’ Trans-Atlantic network, with flights to New York, Chicago and Toronto.

“From the business point of view, this is a very important development and it is also a wonderful and important moment in the development of our company. And this is the very first time we are starting the flight to Azerbaijan,” he said.

“I think because of the importance of today it is imperative that I congratulate Azerbaijan, your great leader and the entire nation and extend best wishes for the future and for the development. I think the touristic importance of Azerbaijan will grow dramatically and I have heard a lot about the investments in Karabakh that are planned and how it is going to be developed. I think this is a great vision and a great success led by President Aliyev,” he added.

Likewise, Azerbaijani Ambassador to Poland Nargiz Gurbanova stressed that the opening of direct flight Warsaw-Baku-Warsaw stimulates the development of economic relations between the two countries. She added that this cooperation will bring the peoples of the two countries even closer, expand opportunities for business missions and strengthen business relations.

“Our embassy will continue to work to strengthen cooperation between our countries not only in the economic sector, but also in the humanitarian and social sectors,” she said.

Azerbaijan is home to rich Polish heritage. Baku’s urban transformation was overseen by three consecutive chief city architects of Polish origin: Jozef Goslawski, Kazimierz Skorewic and Jozef Ploszko, as well as Eugeniusz Skibinski, who worked in the architectural department of the Baku City Council. Yet, the Polish legacy in Azerbaijan at the turn of the 20th century stretches beyond Baku to other cities like Shamakhi, Ganja, Gusar and Zagatala.

With direct flights and convenient e-visa procedures, Azerbaijan is a perfect destination for Polish visitors who are interested in exploring the cosmopolitan city, stunning nature, delicious cuisine, rich cultural and historic heritage along with warm hospitality.

Azerbaijan is now open to 101 countries by air travel. With restored connections via multiple international airlines and easy e-visa procedures, passengers aged 18 and over can now fly to Azerbaijan by submitting a COVID passport.

Azerbaijan and Poland are actively cooperating in various political, economic and cultural spheres. The embassy of Poland opened in Azerbaijan on August 23, 2001, and the Azerbaijani Embassy in Poland on August 30, 2004. The trade turnover between the two countries amounted to $111 million in 2021.