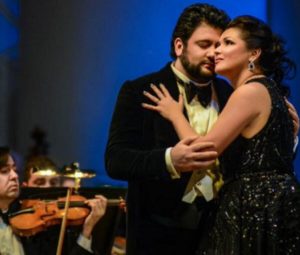 The opera singers will perform both classical arias and popular melodies. The concert will be accompanied by a symphony orchestra and choir, Trend Life reported.

Yusif Eyvazov is a Grand Prix winner of international competitions, whose name is included in the book “The Best Tenors of the World”.

He made a series of important debuts. He starred as Canio in LA Opera’s production of Pagliacci conducted by Plácido Domingo, made his first appearances at the Metropolitan Opera and the Vienna State Opera singing Calaf in Turandot, and debuted at both the Paris Opera and the Staatsoper Berlin as Manrico in Il Trovatore.

Yusif Eyvazov performed at the Mariinsky Theater for the first time, in the title role of Otello with Valery Gergiev. His Salzburg Festival debut took place as Des Grieux in Manon Lescaut. On the concert stage he appeared in Parma under the baton of Marco Boemi with a program featuring works by Verdi and Puccini, in concert with Riccardo Muti.

In 2017, he undertook a major concert tour throughout Asia alongside Anna Netrebko.

At the beginning of 2018 Eyvazov performed on the stage of the Bolshoi Theater: in January- Renato de Grieux in “Manon Lescaut” with Anna Netrebko, in February he sang for the first time the part of Herman in the new production of “The Queen of Spades”, P.I. Tchaikovsky, and Don Carlo, D. Verdi, in March.

On December 7, Yusif successfully opened the season at La Scala by performing the part of André Chénier in the opera of Umberto Giordano. As a result of the close cooperation with the musical director of the production, Riccardo Chailly, Yusif debut on the Milan stage was named one of his best performances in the last few years by the critics.

The Russian operatic soprano Anna Netrebko was awarded the State Prize of the Russian Federation. Time magazine placed her on its Time 100 list in 2007.

She was identified by the journal Musical America as “a genuine superstar for the 21st century” and was named ‘Musician of the Year’ in 2008.

Netrebko was named the best singer in 2017 at the International Opera Awards in London. In July 2017, Russian opera singer Anna Netrebko took the lead in the list of Russian top-earning musicians, according to Forbes Magazine.

Andrea Bocelli – the legend of the new millennium, a brilliant Italian singer, who repeatedly entered the Guinness Book of Records.

Bocelli has recorded 15 solo studio albums of both pop and classical music, three greatest hits albums, and nine complete operas, selling over 90 million records worldwide. He has had success as a crossover performer, bringing classical music to the top of international pop charts.

Olga Peretyatko is a Russian operatic soprano. Her repertory includes operas from Handel and Mozart to Richard Wagner and Richard Strauss. A participant at the Accademia Rossiniana in Pesaro, she has regularly sung at the Rossini Opera Festival: Corinna and Contessa di Folleville (Il viaggio a Reims, 2006), Desdemona (Otello, 2007),[1] Giulia (La scala di seta, 2009), Aldamira (Sigismondo, 2010), and the title role in Matilde di Shabran (2012).