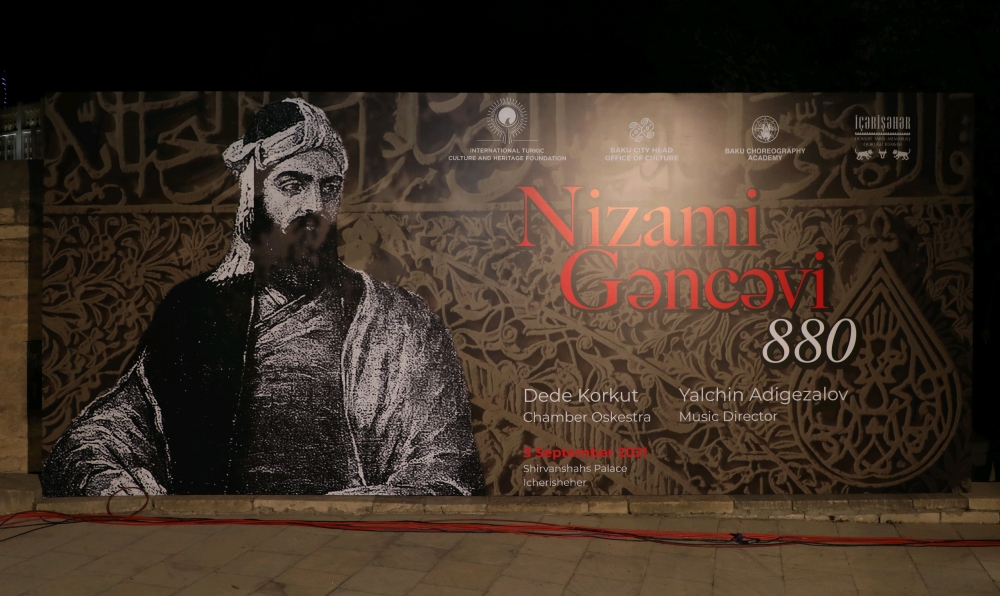 On September 3, an event dedicated to the 880th anniversary of the world-famous Azerbaijani poet and thinker Nizami Ganjavi was held in the Palace of the Shirvanshahs, one of the oldest architectural monuments of Azerbaijan, with the organization of the International Turkic Culture and Heritage Foundation and with the support of the “Icherisheher” State Historical-Architectural Reserve Department, Baku City Main Department of Culture and the Baku Choreography Academy.

Within the framework of the evening of music, literature and art, reflecting the unique creativity of the poet, the “Dede Korkut” Chamber Orchestra, created under the auspices of the Foundation, performed works of outstanding Azerbaijani composers based on poems of Nizami Ganjavi.

The event was attended by officials, ambassadors accredited in Azerbaijan, representatives of international organizations, well-known figures of culture and art.

Welcoming the guests, President of the International Turkic Culture and Heritage Foundation Gunay Afandiyeva said: “Welcome to this ancient palace of the Shirvanshahs, where we are holding a literary – artistic evening dedicated to the 880th anniversary of the great Azerbaijani poet, the pride of the Turkic world Nizami Ganjavi. Today, along with our prominent intelligentsia, ambassadors of foreign countries, representatives of the media of the member and observer countries of the Turkic Council, who have paid a visit to Baku and Shusha, are also taking part here. I would like to greet them too. Nizami Ganjavi lived for 68 years. However, the heritage that he left does not fit not only in 68, but even in the past 880 years. Therefore, Nizami Ganjavi is both our contemporary and a contemporary of all times. During this period, hundreds of research papers and books were written about the work of the great poet. But despite all this, even today Nizami studies continues to make new discoveries, put forward new ideas. Centuries succeed each other. Political and social epochs are changing, and every time the literary heritage of Nizami put forwards a new view. Nizami was born in the ancient city of Azerbaijan – Ganja, located on the Silk Road, lived and created all his life here. He compared the city with ancient Babylon and presented his own creativity as the wealth of Ganja. However, history has proved that his creativity is a human treasure not only of Ganja, but of the whole Turkic world. The states in Azerbaijan during the Nizami period were ruled by such Turkic dynasties as the Shirvanshahs and the Eldegizs. Nizami Ganjavi knew many languages, but he wrote in Farsi, which was the traditional language of poetry of that time. Nevertheless, his spiritual and poetic language was Turkic. His love for the Kipchak girl – Afag is an expression of his love for the entire Turkic world. Nizami was a genius master of the whole Turkic world.”

The President of the International Turkic Culture and Heritage Foundation stressed that 2021 in Azerbaijan has been declared the “Year of Nizami Ganjavi” by the relevant Order of President Ilham Aliyev. “This is a vivid expression of respect not only for classical Azerbaijani literature, but also for the great Turkic world. Nizami Ganjavi played an important role in the development of both Azerbaijani literature and other fields of art. Many outstanding Azerbaijani composers in their work turned to the works of Nizami. Today, some of these pearls will be performed by the “Dede Korkut” Chamber Orchestra, created under the auspices of the International Turkic Culture and Heritage Foundation. Together with the musical director of the orchestra, People’s Artist of Azerbaijan, famous conductor Yalchin Adigozalov, we have set ourselves the goal of promoting the rich culture, art and music of the Turkic world throughout the world. In this historical place I invite you to the magical world of art of the great Nizami, as well as our immortal composers such as Uzeyir Hajibeyli, Gara Garayev, Fikrat Amirov,” said Afandiyeva.

Speaking at the ceremony, Minister of Culture of the Republic of Azerbaijan Anar Karimov thanked President of the International Turkic Culture and Heritage Foundation Gunay Afandiyeva for organizing the event and said: “Indeed, we all really missed such events. The initiative of the International Turkic Culture and Heritage Foundation in organizing this event deserves praise. As you know, by the leadership of the country this year was declared the “Year of the Nizami”. This is another example of the attention and respect shown to the Azerbaijani genius, poet and thinker Nizami by the state. The announcement of this year means the promotion of Nizami both in Azerbaijan and in the international arena. Despite the fact that this person did not go beyond the borders of Azerbaijan-Ganja, his works and philosophical ideas spread not only throughout the Turkic world, the region, the Middle East, but also around the world; they became a role model; many referred to the principles and values reflected in his works. This is the uniqueness of Nizami. It is no coincidence that leading European writers and poets were inspired by his works.”

The Minister of Culture stressed that other relevant institutions have also prepared a plan of events dedicated to the “Year of Nizami Ganjavi”. The Minister noted that this year it is planned to publish gazelles of Nizami Ganjavi, widely promote his works, hold an international literary festival, release films based on his poems, as well as a number of other events. Anar Karimov also said that the Baku International Book Fair will be named after the poet. The Minister stressed that today’s event is of particular importance among such events.

“I would like to note that as the Ministry of Culture, we closely cooperate with organizations representing the Turkic world. This is a priority part of our policy. We can promote the heritage of our common personalities, traditions and history of the Turkic world,” he said.