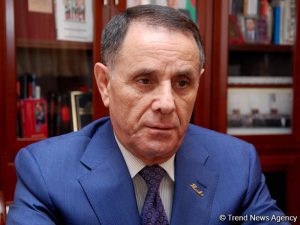 “The multilateral cooperation established in culture, science, sport and others spheres is of paramount importance for our country,” he said. “Being a platform for discussing regional and international issues, the CIS contributes hugely to the implementation of measures of fighting crimes and modern challenges. Azerbaijan attaches great importance to the regular meeting of the CIS Heads of State Council scheduled for November 2, 2018 in Astana in terms of economic, financial and humanitarian issues.”

He noted that both countries value common roots, common culture and spirituality. He highly assessed the level of relations between Kazakhstan and Azerbaijan and assured he will further take efforts in the interests of the two fraternal countries.

He reminded that Kazakhstan and Azerbaijan are located along the international transport corridor running from China to Europe and both states are eager to fully use the potential of this transit route.

Baku-Tbilisi-Kars railroad commissioned in October 2017, the new Baku Sea Port and railroads connecting west and east Kazakhstan as well as Kuryk Sea Port will serve to further enhancing transport potential of Azerbaijan and Kazakhstan, he said.

“Cargo transportation en China-Europe route has increased to date,” he noted. “I am sure that in the oncoming period the frames of regional cooperation between our countries will broaden and this cooperation will give fruitful results at a global scale.”