President Aliyev: Armenia to pay for all damages to Azerbaijan’s historical heritage 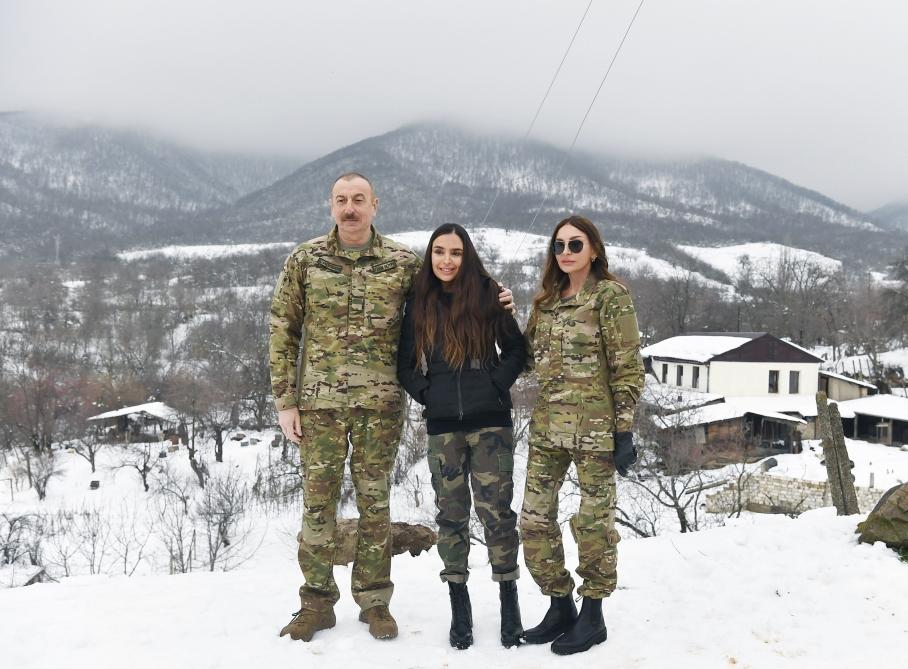 President Ilham Aliyev has said that Azerbaijan will urge Armenia to compensate for the damages it inflicted on the country’s historical heritage, Azertag has reported.

He made the remarks as part of his visit to liberated Fuzuli and Khojavand regions on March 15. First Vice-President Mehriban Aliyeva and their daughter Leyla Aliyea accompanied the president during the visit.

“Now we will enter the Azykh cave. This cave was discovered by Azerbaijani scientist and archaeologist Mammadali Huseynov in 1960, and since then research has been conducted here. It is one of the oldest human settlements in the world, belongs to the history of Azerbaijan, is our historical treasure. Armenia illegally worked in this cave, illegally brought scientists from abroad. They have caused great damage to this cave and our historical heritage. They will pay for all this damage. We will force them,” Aliyev said.

The president added that research by local and foreign scientists will continue in the cave in the future.

“Azykh cave is located on Azerbaijan’s territory. After that, Azerbaijani scientists and foreign scientists invited by them in the future will conduct research here legally,” he said.

As part of his visit to the region, the president laid the foundation of the Fuzuli-Hadrut and Hadrut-Jabrayil-Shukurbayli highways.

He said that the construction of the highway is of great importance for the restoration of the liberated areas.

“This is not the first project. Several road projects are already underway. The restoration of the liberated lands has begun. The road from Fuzuli to Shusha is being built, the Victory road is being built. At the same time, the construction of the Barda-Agdam road will be completed in the near future. The road will be built from Horadiz to Zangilan. In short, despite the fact that four months have passed since the war, great creative work has begun,” he said.

The Fuzuli-Hadrut road originates from the Victory [Fuzuli-Shusha] road and connects to the new Hadrut-Jabrayil-Shukurbayli highway. The 13-kilometre road will have four lanes. Road bridges will be built along the road. The Hadrut-Jabrayil-Shukurbayli highway starts from Hadrut settlement and passes through Jabrayil region and joins the Hajigabul-Minjivan-Zangazur corridor in Shukurbayli village. Its length is 43 kilometres. Road bridges will be built along this four-lane road, Azertag said.

As part of the visit, Aliyev visited ancient Albanian churches in Hunarli and Tug villages vandalized by the Armenians.

Speaking about the church in Hunarli village, Aliyev said Armenians’ attempts to Armenianize the church failed.

“The Armenians wanted to Armenianize this church as well and wrote articles in Armenian, but they could not. Now, if it were an Armenian church, would they put it in such a situation? It looks… as if it were stable. This is our ancient historical monument, the temple of our Udi brothers,” he said.

The president stressed that the Armenians insulted the ancient Albanian temples just as they did with the mosques.

“But we will restore. All these inscriptions are fake, they were written later. They have created a false history for themselves in our ancient lands. But they did not succeed, we exposed them. The fact that this church – the Albanian temple – is in this condition once again shows the Armenian forgery. If there was an Armenian church, they would repair it. Then there are those who criticize us for not taking good care of Christian monuments. Armenians brought it to this day,” he added.

“The world should know and see the savagery of Armenians in our mosques. There were 67 mosques in the liberated lands, only two of which remained and were partially destroyed… Everyone should see and know this. If someone wants to make any baseless accusations against us from now on, he will get the answer, as he has got so far,” he said.

Aliyev shared similar views about the Albanian church in Tug village. Speaking about operations to liberate Hadrut, Jabrayil, Fuzuli and Khojavand, the president said that Azerbaijani servicemen unlike Armenians fought only against the military, not civilians.