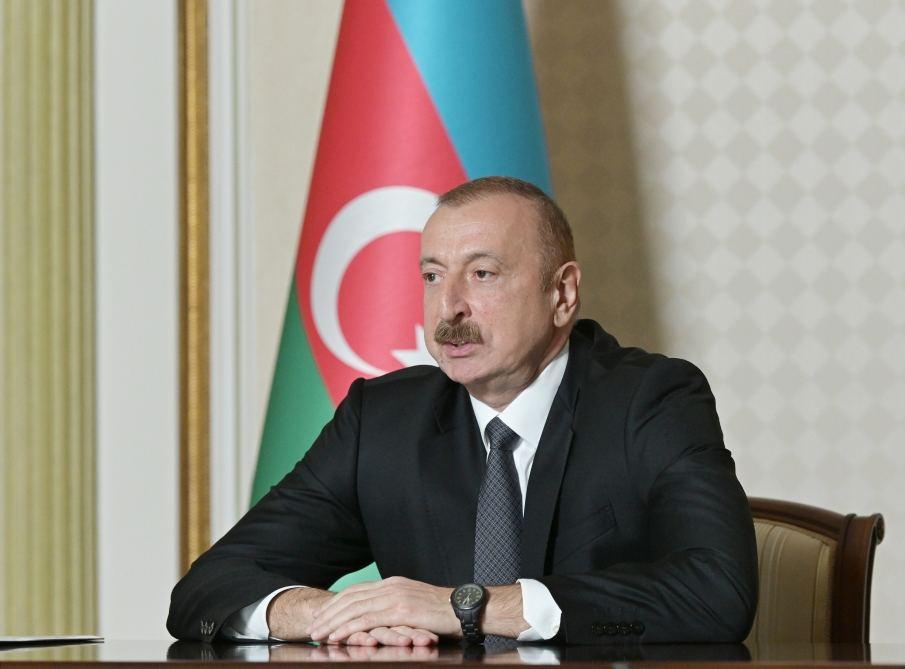 President Ilham Aliyev has said that Azerbaijan is turning into regional hub for the industrial revolution. Aliyev made the remarks during the video conference with Microsoft Vice President Philippe Rogge on June 16

Head of Corporate Relations and Legal Affairs of Central and Eastern Europe Nanna-Louise Linde and other representatives of the company also attended the meeting initiated by Microsoft.

“Azerbaijan is turning into a regional hub for the industrial revolution. Mr. Borge Brende [President of the World Economic Forum] and I signed a document on the establishment of the Davos Regional Center for the Fourth Industrial Revolution in Baku during the Davos Economic Forum. Thus, this centre will cover not only Azerbaijan but also the regional countries,” Aliyev said.

He voiced his country’s interest to work with Microsoft.

“I think it would be natural for us to go further and work with you on the innovation centre. As you know, our main strategy is to reduce dependence on hydrocarbon resources and achieve sustainable development based on innovation, new technologies and modern management. Therefore, I think that joint work on this issue can strengthen our cooperation”, the president said.

Furthermore, Presidential aide Shahmar Movsumov said that the government is currently working on Azerbaijan’s innovation strategy to achieve economic development based on innovative approaches, and is also working with Microsoft on this issue.

“We believe that Azerbaijan has great potential to create the Absheron Valley as Silicon Valley to become the centre of innovation in our region,” Movsumov said. He appreciated the active participation of Microsoft in this matter.

Anke den Ouden, General Manager of Microsoft’s Multi-country Cluster for Central and Eastern Europe, spoke about the cooperation with the relevant Azerbaijani ministries. Noting the importance of “Teams” program for educators as well as teachers, Ouden said that Microsoft is committed not only to the support of the Azerbaijani language but also to the support of the “Teams” program.

“You are one of the most innovative countries in the field of education. We would like to continue this work,” he said.

The sides also discussed the fight against COVID-19.

Aliyev reminded that the World Health Organization has described Azerbaijan an exemplary country in fight against coronavirus pandemic. Aliyev noted that Azerbaijan has provided humanitarian assistance to 29 other countries over pandemic. “We demonstrate ourselves as a reliable member of the international community”, he added.

Furthermore, Aliyev recalled that the first quarter of the year was very promising for Azerbaijan’s economy. “However, now the results of five months show a small decline in GDP – about 1.7 per cent”, he added. The president pointed out that regardless of this, the country had observed growth in some sectors of the economy, particularly in the non-oil and gas-related sectors.

“Today, we are coordinating restrictive measures, as COVID-19 still exists. At the same time, we are beginning to open up our country…. We hope that this balanced approach will help us, first of all, to continue the successful fight against the pandemic”, Aliyev said.

“Our joint efforts against piracy are yielding good results. As for our future plans, you probably know that we are currently working on a government strategy for digital transformation. We hope to be able to work well with Microsoft on this issue. This program is planned for the next five years. At the same time, issues related to the development of a detailed strategy for artificial intelligence are also on the government’s agenda,” noted the president.

The president said that cyber security was also in the government’s agenda.

“So far, we have not had such big cases, but no one is insured. Therefore, this remains a priority for our future”, added he.

Regarding the list of implemented projects, Aliyev emphasized that the cooperation between Azerbaijan and Microsoft was very impressive and expressed hopes that the partnership will strengthen in the coming years.

Moreover, the president spoke about the importance of distance learning. “Although we did not have much time to adapt to the current situation, certain steps have been taken because our schools and universities have been closed since March. We must prepare for the new school year, which will begin on September 15. We do not know what the pandemic situation will be like then, we do not know if we can open schools and universities, so we must be prepared for the worst-case scenario. If the problem persists and gets worse, then we will have to think about it”.

Touching upon the distant education issues, Rogge said that Microsoft has been able to connect one million Azerbaijani students. “I am proud of the work that our teams and partners are working with the educators in your ministry to connect everyone as quickly as possible, in a matter of weeks”, he said.

The Vice-President of Microsoft noted that the problem the company faced in other countries is that the number of devices in homes is limited, while it seems that this is no problem in Azerbaijan.

Speaking about “cloud computing” and cyber-security, Rogge emphasized that Microsoft’s artificial intelligence platform would soon perceive the Azerbaijani language, and added that he was looking forward to the launch of the Azerbaijani translation service.

Moreover, regarding the market of “cloud computing”, Rogge pointed out that effectively, the best-talented people from Azerbaijan can compete in the global market. They do not need to operate from San Francisco, Silicon Valley, to have the economic power of real “cloud computing”.

Expressing his gratitude for the video meeting, President Aliyev said that this was a good opportunity to take a look at the work implemented since the meeting between Microsoft and Azerbaijan in Baku in 2018 and plan future steps.

“I think that the partnership that has been going on in Azerbaijan for more than 15 years has great potential and a great future. We will be partners in the coming years”, Aliyev concluded.