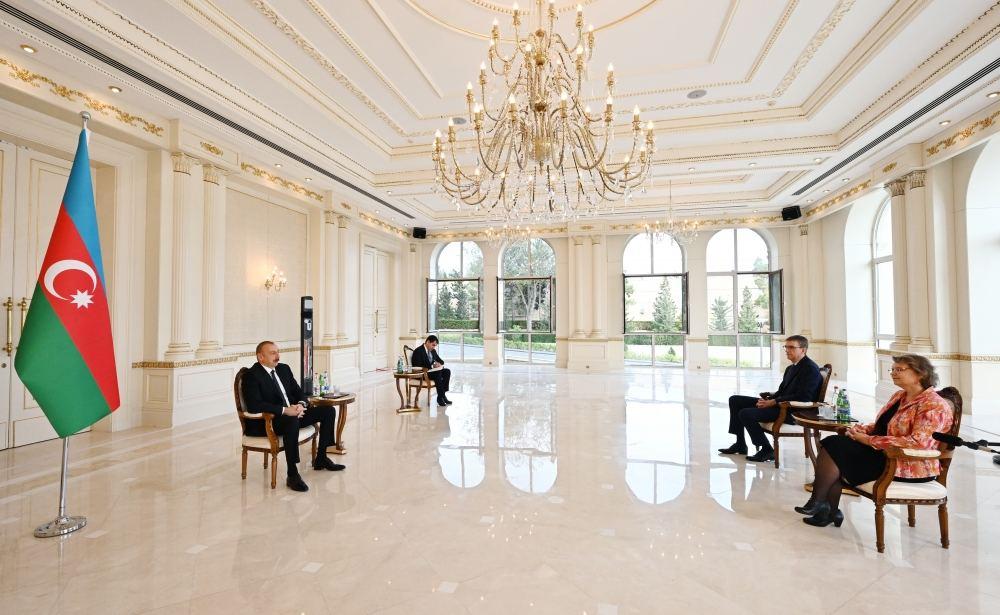 He made the remarks while receiving credentials of newly-appointed ambassador of the Netherlands Pauline Eizema on 18 November.

“Unfortunately, when our meeting was appointed I got information that parliament of your country adopted a motion-anti-Azerbaijani motion, also, anti-Turkish motion, providing the sanctions against Azerbaijan. I was informed by my assistant that during the discussions the foreign minister of the Netherlands advocated for a more balanced approach. So, we appreciate that, but of course, the fact that the parliament adopts such an unbalanced and I think, the unjust decision will not, of course, help us to establish closer ties,“ Aliyev said.

Speaking about the recent liberation of Azerbaijani territories from Armenian occupation, Aliyev urged to take in view the fact that it was Armenia which had attacked Azerbaijan.

“We were defending ourselves and as a result of that, we managed to liberate territories which belong to us due to the norms and principles of international law, and belong to us historically. Our fight was a fight for freedom, for liberation and it ended with the great military success and also a political success. And on November 10th as you know, the trilateral statement was signed which put an end to war,” Aliyev said.

The president pondered reasons for the adoption of the abovementioned decision by the Dutch parliament.

“For me, it was very strange that after that, after Armenia itself signed this declaration which basically is a capitulation, such a decision was adopted in a country which is situated far away from our region. As you probably know, the regional countries supported this declaration. All our neighbours expressed support to this declaration,”  he said.

Aliyev stressed that Russia and Turkey will ensure security in the region.

“Two of our neighbours – Russia and Turkey will be part of the operations which will provide security and safety for Azerbaijanis and Armenians. So, I think that it is more just to be on our side rather than on some other side. And also, probably, you are informed about the comments of the US State Department, which supports the ceasefire, the European Union. Therefore, I understand that parliamentarians have their own agenda, sometimes they have their own preferences, it’s understandable. I understand that the government of your country has its own position which may be different from what was adopted by the parliament, but it will be difficult to explain to our people why it happened,” he said.

Aliyev stressed that from a practical standpoint, the Dutch parliament’s decision will have no impact on the ground and added that the “situation is now stabilising”.

Aliyev noted that Azerbaijan was expecting the Dutch government’s position on the issue.

“It will also depend on the position of your government, of your foreign minister. We are expecting their comments on that because my assistant told me that there have been comments during the discussion, but we expect comments now after this decision was made. Of course, we will be expecting the comments from the European Commission. As you know, the European Commission and Azerbaijan have a very broad agenda of cooperation and two years ago we initialled ‘Partnership Priorities’ document in Brussels which fully supports the sovereignty, territorial integrity, and inviolability of international borders of Azerbaijan. Azerbaijan was fighting on its own territory, was restoring its own territorial integrity and it is in line with the UN Security Council Resolutions, with the document which was initialled by the EU and Azerbaijan,” he said.

The president expressed the hope that “this not very pleasant page in our history will not seriously damage our relations”.

“Of course, it will depend on the further steps of your government and our government which will act on a corresponding way. So, welcome once again,” the head of state added.

“In our system, there is a difference, the government has a position, the parliament has a position and that requires dialogue. That dialogue took place on several occasions, in which we also noted that the balanced position of the government was not always the same position as the parliament. In the recent discussion last week, between the parliament and minister these questions were also raised. And the minister both in writing and orally has consistently said that these things that are raised are not according to the position of my government,” the ambassador added.

She ruled out the possibility of any sanctions against Azerbaijan.

“So, sanctions, and all that is absolutely not on the cards right now, there cannot be any question over the discussion about that. So, that’s something that my minister has said very clearly in parliament, but also in writing. So, I am happy that I can repeat that again here,” Eizema said.

President Ilham Aliyev thanked for the best wishes of Willem-Alexander and asked the Ambassador to extend his greetings to the King of Netherlands.