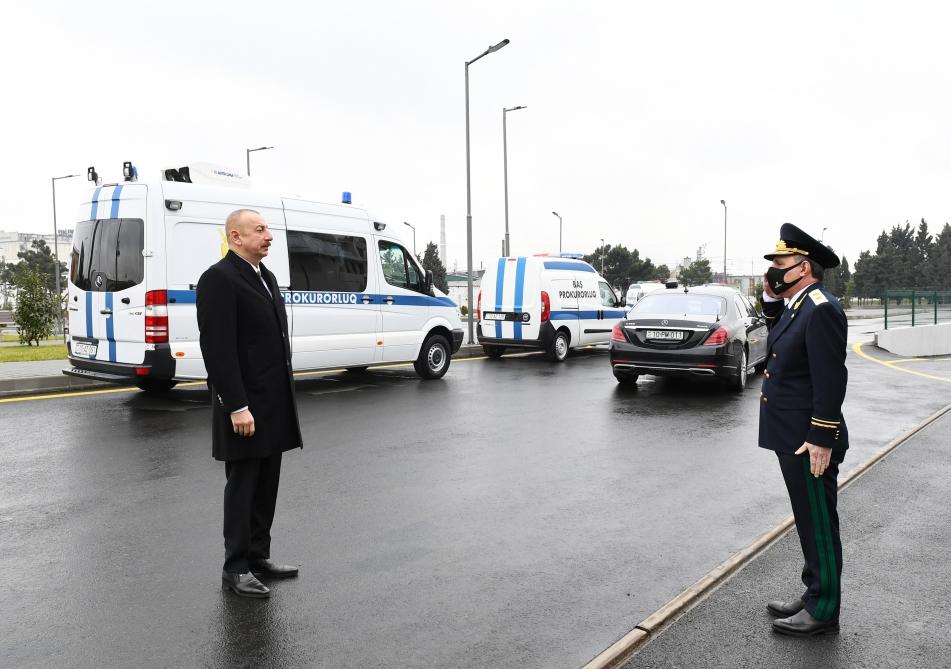 President Ilham Aliyev has attended the opening of a new complex of the administrative building of the Azerbaijani Prosecutor-General’s Office in Baku’s Binagadi district.

The new structure of the Prosecutor-General’s Office was approved under the presidential decree dated June 10, 2020, to ensure the adequate adaptation of the prosecution agencies to new challenges in society and maintain transparency in their activities.

While touring the new administrative building, Prosecutor-General Kamran Aliyev informed President Ilham Aliyev of the complex which features four blocks. Briefing the president, he said that six departments of the Prosecutor-General’s Office and a scientific-education centre will operate in a complex which features four blocks.

The prosecutor-general added that the modern conditions created in the new administrative building will contribute to ensuring more efficient and productive activities of the prosecutor’s office employees. At the same time, the work to ensure citizens’ satisfaction had been adapted to the relevant standards and modern form in the new complex.

New departments and divisions, including the Department of Criminology and Informatics, have been established as part of the reforms.

All rooms in the complex are supplied with state-of-the-art information and communication facilities. Kamran Aliyev added that three meeting rooms and a conference hall for 320 people in the administrative building will allow the Prosecutor-General’s Office to hold international events, training sessions, seminars, news conferences and presentations.

The head of state was also informed about cars with mobile forensic laboratories. It was noted that with the help of batteries installed in cars, it is possible to illuminate the scene in autonomous mode for 1.5-2 hours without starting the engines, as well as the area under investigation. In the CIS, such cars equipped with modern machinery and equipment are available only in Azerbaijan.

President Aliyev viewed the historical-memorial gallery created in the administrative building of the complex and dedicated to the 44-day Patriotic War. The gallery features material pieces of evidence reflecting the terror acts committed by the Armenian army against the civilian population and facilities in the cities of Ganja, Tartar and Barda during the war.

Landscaping work was carried out, green areas were laid out and a state-of-the-art lighting system was installed in the territory of the complex.

It should be noted that President Ilham Aliyev’s active legal policy is aimed at ensuring the supremacy of law. Improving the activities of the Prosecutor-General’s Office at the level of the most modern requirements, improving the infrastructure demonstrates the consistency of reforms in this area.