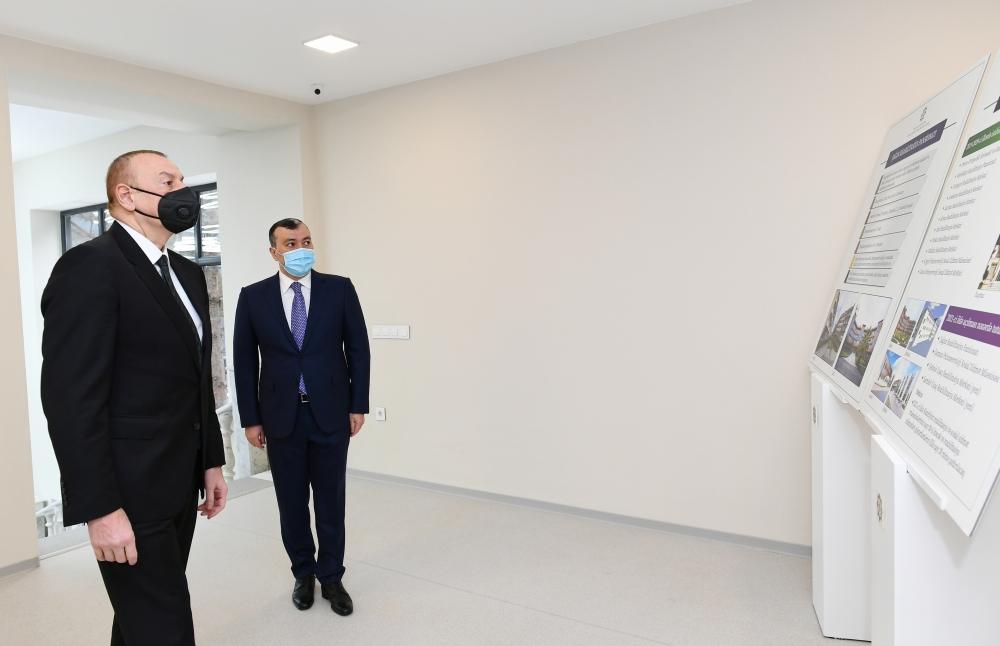 Azerbaijani President Ilham Aliyev has lauded the state care for families of martyrs and war disabled following the country’s victory in the 44-day war with Armenia in 2020.

He made the remarks in a ceremony to give out apartments to families of martyrs and war disabled in the residential complex in Ramana settlement, Baku, on February 25.

“I would like to emphasize the government’s care for this category of people. I want to say that Azerbaijan is one of the leading countries in the world in this area. There have been many wars and losses in the world. If we look at the recent history, we can see that the relatives of those who died in wars in different countries have never been treated with as much care and attention as here,” Aliyev said.

Speaking about losses in the Armenian army, he noted that according to information available to Azerbaijan, “about 6,000-7,000 invaders were killed”.

“Not a single family has received any help from the Armenian state. In general, Armenia has no such program at all. The relatives of those killed in the war do not even receive a hut, not to mention a house. Cognition comes through comparison. Our policy in this area is unequivocal. This policy is based on moral norms, and the relatives of those who died for the Motherland will continue to be taken care of by the state. The increase in the amount of benefits and pensions in recent years is obvious. The Azerbaijani state will continue this policy,” the head of state said.

Aliyev said that Azerbaijan lost about 3,000 servicemen, including civilians in the war. He also revealed details about the country’s losses in the war in the early 1990s and said the casualties in the second war were rather low compared to the first one.

“In the First Karabakh War, we had more than 12,000 martyrs and about 4,000 servicemen went missing. We had about 16,000 losses and our lands were occupied. Considering the scale of the Second Karabakh War, the number of our martyrs was extremely small,” he said.

The president noted that Azerbaijan achieved what it wanted with small losses.

Aliyev reiterated that Azerbaijan’s war was a war of freedom, a just war, however, Armenia was waging a war of aggression.

“According to their own reports, there were more than 10,000 deserters in the Armenian army. The Armenian state does not know how to judge these deserters now because this can also lead to major problems too. There was not a single deserter in the Azerbaijani army,” he said.

He added that there was no interest in the solution of the conflict or “someone was interested in the neither-war-nor-peace situation”.

He noted that Azerbaijan would never allow the creation of a second so-called Armenian state on its lands and “we did not allow that”.

He stressed that Azerbaijan, through mobilizing all its forces, pursuing a consistent policy, doing great job in the international arena, in the economic sphere, in its relations with neighboring countries, implementing regional projects, improving army building, reached its goal to liberate the lands.

Aliyev pledged that Azerbaijan will continue strengthening its army.

“We will continue to strengthen our army. New contracts have been signed, the most modern weapons are being purchased and are already being imported. All modern weaponry available in the world has already been contracted and will be delivered to Azerbaijan. The war also raised the issue of the future of our army. The reforms that will take place will lead to the creation of a more agile, more combatant and more capable army,” he said.

Aliyev compared the post-war situation in the two countries, saying that Azerbaijan is developing and Armenia is in crisis.

Meanwhile, he questioned the lack of any reaction by international rights organizations to the oppression of the Armenian opposition.

“For some reason, however, certain non-governmental organizations and some governments preaching democracy are turning a blind eye to this. How is it possible that the opposition in Armenia is oppressed, destroyed, arrested and killed on a daily basis, but no-one seems to react to that,” he said.

Aliyev described this as an indication of the fact that Azerbaijan had not won the victory only over Armenia. “Organized and powerful circles were united against us. They wanted to keep our lands under occupation forever. Armenia was just a tool, a means. We have destroyed them. We have overthrown this insidious policy and restored justice,” he added.

Commenting on the political crisis in Armenia, he stressed that “the democratic foundations are almost completely gone” and blamed its leaders for the situation.

“Armenia has never been in such a miserable state. It is their leaders who put them in this situation – both the leaders of the junta that led Armenia for 20 years, the Kocharyan-Sargsyan junta, and the government that came to power after it. The government that came to power afterwards had a choice – either to continue the policy of aggression and bring itself to a miserable state or to leave our lands of its own free will,” the head of state said.

“The Armenian leadership now complains that the weapons given to them were useless. You know, it is easy to blame someone. However, they must also say that these weapons were given to them free of charge. In fact, they were armed against us not just for one year, not for two years, but for 30 years.”

Aliyev added that Azerbaijan is now using all the opportunities available to closely monitor the developments unfolding in the region.

“We have opportunities, we have enough sources of information. We know how much free weaponry was given to Armenia during the war, how much was given before the war. Immediately after the July clashes [Armenian armed attacks in northwestern Azerbaijani region of Tovuz bordering Armenia], starting from 17 July until the last day of the war, several planes brought free weapons to Armenia every day. Did Armenia buy those Iskander missiles for money? It got them for free. Did they buy Elbrus, Tochka-U and Scud missiles for money? They got it for free. The S-300, seven of which we destroyed, were provided free of charge, just as tanks, artillery and other air defence systems. We have destroyed them all. There is no Armenian army any more. It is gone,” he stressed.

He pledged that Azerbaijan will retaliate in case of any further attack from Armenia.

“If someone cherishes some revanchist sentiments, they will see this fist again, it is still there, so they should not test our patience. The Armenian army is gone. It is not and should not be there. There should be no army in such a fascist state. We will never allow any threats to us or to our citizens who will return to the liberated lands,” he said.