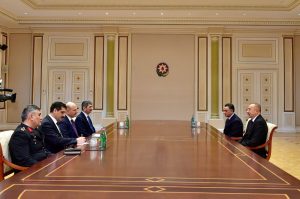 The head of state hailed the successful development of friendly and brotherly relations between Azerbaijan and Turkey in all areas, including the bilateral cooperation between the two countries’ interior ministries, saying that these relations reached even higher level this year. President Ilham Aliyev noted that numerous contacts and meetings held between the two countries’ presidents both in Azerbaijan and Turkey as well as during international events play a crucial role in strengthening the bilateral ties.

The head of state also pointed out that a number of important joint projects, including TANAP and Star Oil Refinery were inaugurated this year, and hailed very good cooperation between the two countries in political, economic, transport, energy, and other fields.

President Ilham Aliyev described the military parade held with the participation of the Turkish President to mark the 100th anniversary of the liberation of Baku as a beautiful sign of the friendly and brotherly ties between the two countries.

The head of state expressed his confidence that the next year will also be successful for the development of Azerbaijan-Turkey relations, and noted that the Turkish Minister of Interior Suleyman Soylu’s visit to Azerbaijan will contribute to the expansion of bilateral cooperation between the two countries.

Turkish Minister of Interior Suleyman Soylu thanked President Ilham Aliyev for the reception, and extended Turkish President Recep Tayyip Erdogan’s and the Turkish people’s greetings and best wishes to the head of state. Suleyman Soylu noted that built on the “One nation, two states” principle coined by the great leader and outstanding statesman Heydar Aliyev, Turkey-Azerbaijan ties are developing successfully.

He underlined that these relations continue to be developed by the Azerbaijani and Turkish heads of state and make significant contributions to the region and the world. Suleyman Soylu described these ties as an example of brotherly relations. The Turkish minister noted that Azerbaijan`s grief, particularly the Nagorno-Karabakh problem, is Turkey`s grief, and Azerbaijan`s rejoice is Turkey`s rejoice.

The head of state thanked for Recep Tayyip Erdogan`s greetings, and asked the minister to extend his greetings and best wishes to the Turkish President.

Previous Azerbaijan’s most successful film in 2018
Next Azerbaijani oil sells for $55.04