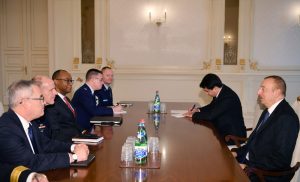 President of the Republic of Azerbaijan Ilham Aliyev has received a delegation led by commander of the U.S. Transportation Command general Stephen Lyons.Pointing out strong partnership ties between Azerbaijan and the U.S., the head of state said the bilateral relations cover different areas, including political, economic, energy and defense ones. The President hailed the expansion of long-term cooperation between the two countries. President Ilham Aliyev noted the role of visits of high-level U.S. officials to Azerbaijan in developing the bilateral ties. Highlighting both countries` contribution to international peace and stability in Afghanistan, the head of state said Azerbaijan was one of the first countries to be involved in peacemaking operations in Afghanistan. President Ilham Aliyev said the number of Azerbaijani soldiers in Afghanistan has recently been increased, adding that NATO member states recognize Azerbaijan`s contribution to the Resolute Support Mission in Afghanistan and transport and logistic support to NATO countries. In this regard, the President recalled his latest visit to the NATO headquarters and his speech at the organization`s supreme body, the North Atlantic Council, saying he saw there that great importance is attached to our cooperation. President Ilham Aliyev also noted the significance of bilateral relations with Afghanistan, saying Azerbaijan gives aid and support to the Afghan government in a variety of areas. The head of state said Azerbaijan hosted “Heart of Asia – Istanbul Process” high-level event last year in order to contribute to ensuring stability and security in Afghanistan.Highlighting huge investment made in the transport infrastructure, including motorways and railroads, airports and seaports, President Ilham Aliyev said Azerbaijan is one of the countries that have strong transport infrastructure not only at the regional, but at a broader scale.The head of state said general Stephen Lyons` visit opens up good opportunities for discussing cooperation prospects.Commander of the U.S. Transportation Command general Stephen Lyons congratulated the President of Azerbaijan on National Flag Day. He said U.S.-Azerbaijan strategic relations are of vital importance. General Stephen Lyons said Azerbaijan is making great contribution to the transport sector within the Resolute Support Mission in Afghanistan, noting that this contribution is highly praised. He said that as a serviceman who served in Afghanistan he saw excellent works carried out by Azerbaijan in this country.