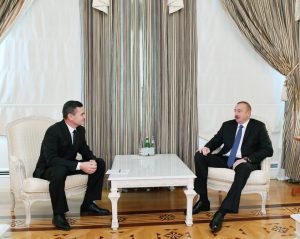 President of the Republic of Azerbaijan Ilham Aliyev has received Deputy Chairman of the Cabinet of Ministers of Turkmenistan Mammetkhan Chakiyev.

President Ilham Aliyev noted that reciprocal visits by the heads of state as well as regular meetings held as part of international events play an important role in developing relations between the two countries. The head of state also mentioned that the meetings between the heads of relevant authorities contribute to the expansion of cooperation between Azerbaijan and Turkmenistan. President Ilham Aliyev said that various aspects of bilateral ties were discussed during the recent visit of Deputy Chairman of the Cabinet of Ministers and Minister of Foreign Affairs of Turkmenistan Rashid Meredov to Azerbaijan. The head of state hailed the fact that Deputy Chairman of the Cabinet of Ministers of Turkmenistan Mammetkhan Chakiyev is visiting Azerbaijan accompanied by a large delegation, expressing confidence that this visit will contribute to the strengthening of friendly and brotherly relations and expansion of cooperation.

The importance of both countries’ favorable geographical location was emphasized at the meeting. The creation of the state-of-the-art transport infrastructure in both Azerbaijan and Turkmenistan was pointed out. Great potential for expanding cooperation in the field of transport, transit and logistics was underlined, and the sides also exchanged views on the two countries` export opportunities and the issues relating to transit cargo transportation.

President Ilham Aliyev thanked for the Turkmen President`s greetings and asked Mammetkhan Chakiyev to extend his greetings to Gurbanguly Berdimuhammedov.